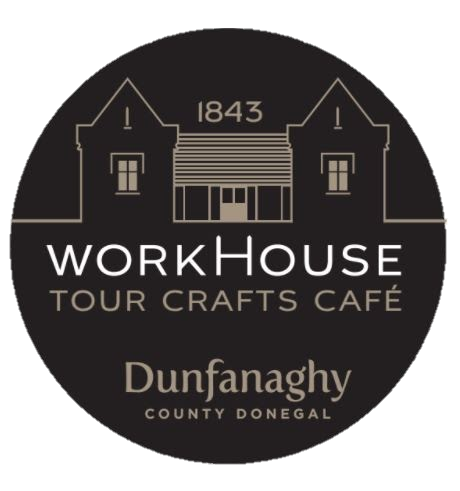 The Dunfanaghy Workhouse opened in June, 1845, making it the last of the originally planned workhouses to open in Ireland. It was built on a site purchased from Alexander Stuart of Ards in 1842 and cost £5,000 to build or roughly €356,000 today. Like most workhouses in Ireland and Britain, it was designed by the Poor Law Commission’s Chief Architect, George Wilkinson, and is made up of  limestone quoins and, unusually, sandstone. The total capacity of this Workhouse was 300, making it one of the smallest in the country. During the Famine years, they extended the Workhouse to house a capacity of 600.

Life within the Workhouse was not easy. Children and adults were kept apart, and further separated by gender, the rules were strictly enforced and the work was hard, but compared to other areas Dunfanaghy was one of the better-off unions, even during the Famine years. While they were greatly affected by the Famine, with the population within the workhouse growing to almost 500 in 1847, it was quite low compared to the West of the country. By 1853, the numbers of those within the workhouse dropped down to 88.

Between 1841 to 1901, the population of the Dunfanaghy Union fell from 18,000 t0 16,000. Most who emigrated went to Britain or North America through the Derry Port. If you head to Cloughaneely, roughly 20mins from the Workhouse, you will find Droichead na nDeor, or “The Bridge of Tears”, so named because this would be the last stop for families to see their loved ones before they headed to the Derry Port. Quebec has quite a high number of Donegal migrants due to the introduction of an emmigration scheme in 1884.

The Workhouse remained open until 1922. Following this, it became a co-op and storage for the council roadworks, until it was declared a heritage site in the 1980s and reopened as the Heritage Centre we know today in 1995, with the unveiling done by former President Mary Robinson. Most of the original structure is gone, but the two main buildings, the offices and the reception building, are still standing. Today the Workhouse offers an audio tour that tells the history of the building, the Famine years and the story of Wee Hannah Herrity, a tenacious woman that survived it and its hardships. There is also a café, craft shop and play park, and it is within walking distance of the village square. The Paupers Graveyard is also within walking distance of the Workhouse.

In 2021, the Heritage Trail was launched in Dunfanaghy. The trail takes walkers on a historical tour through the village with an accompanying audio track and app. The starting point for it is at the Workhouse.

The village of Dunfanaghy had a thriving fishing community, and the signs of this past life can still be seen today through its piers and with the traditional Currach boats that are easily spotted dotted throughout the landscape. The Dunfanaghy Currach, also known as the Sheephaven Currach, is one of the oldest and most primitive of Ireland’s currachs, and a replica of one can be found on display at the Workhouse.  Today, the village is a popular tourist destination that offers surfing, crafts, and some amazing seafood.