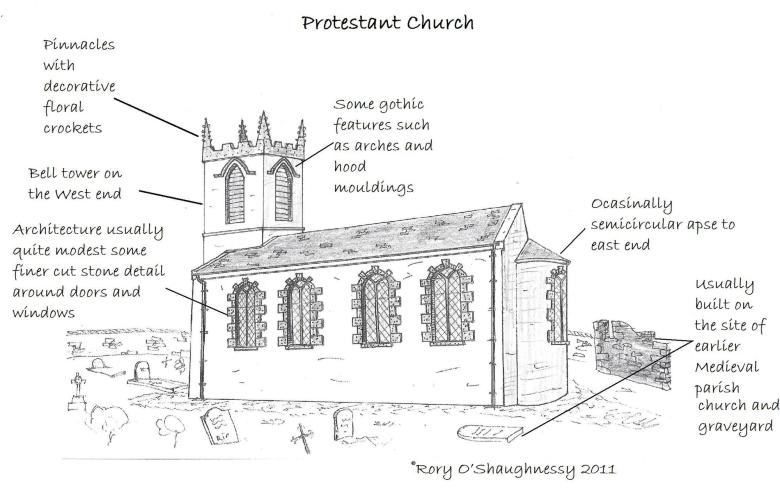 One of the principal buildings in the parish is the Parish church - in fact a parish is defined by the presence of a church. Formal parish entities originated in the twelfth century in the Anglo-Norman region of eastern Ireland, while they do not occur until the thirteenth century in western dioceses.

By and large Catholic churches are quite modern in origin with the majority dating to the early nineteenth century built after Catholic Emancipation in 1829. Though, there are a number of churches that are of eighteenth-century date, some of which were Penal era churches.

One important consideration is the geographical location of churches in the landscape. Where Protestant churches are concerned they are often to be found on or close to the site of the original medieval parish church due to the acquirement of the sites by the Established Church at the time of the Reformation. Protestant churches are fewer in number their occurrence being directly linked to the size and distribution of that particular population group. The abundance of Catholic churches is directly related to the occurrence of a far greater Catholic population.

A look at the setting of the modern parish church generally shows a church often accompanied by a school at a central location in the community. What is of interest is that in many cases the community graveyard continued to be used at the earlier medieval church site despite change of ownership. In later years new graveyards were developed nearer to the modern church.

A large parish often has more than one church the main church lies in the village or centre of the parish the other churches are usually situated in eachof the former civil parishes that make up the modern one and function as churches of ease to the main parish church.