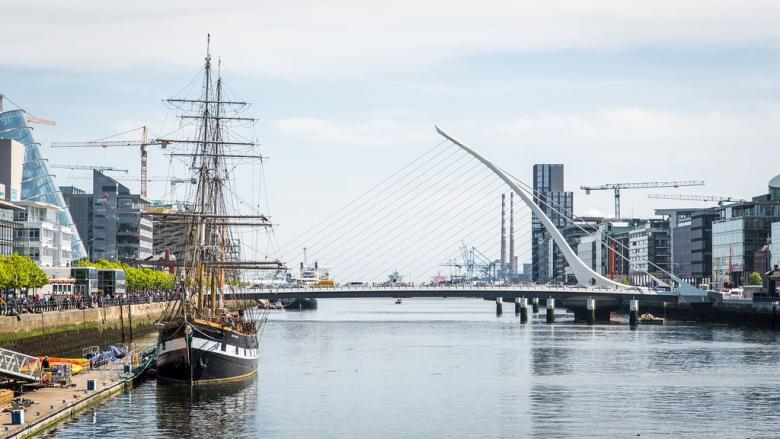 Follow in the footsteps of those who fled the Famine to North America on board the Jeanie Johnston, a replica famine ship situated in Dublin's Docklands. Hear the remarkable stories of the thousands of Irish people who embarked on a treacherous voyage in the hope of a better life.

One million Irish people fled Ireland during the famine. 2,500 took a gruelling voyage on the Jeanie Johnston. Take a journey back in time, get an insight into life on board a Famine ship and hear the stories of the people who made the arduous voyage

This 50 minute guided tour being above deck where you can see the majestic masts, admire the craftsmanship and learn about the ship’s history. Next it’s time to take a deep breath and go below deck to experience the cramped quarters where up to 250 passengers spent most of their time, only emerging for a half an hour of fresh air each day. Here you’ll learn some of the remarkable stories of real passengers and crew

The history of the Jeanie Johnston

The original Jeanie Johnston was built in Quebec in Canada in 1847 by Scottish-born shipbuilder and master craftsman, John Munn. It was purchased by Kerry-based merchants, John Donovan and Sons. Originally intended as a cargo ship, she ended up carrying a very different kind of cargo - desperate men, women and children fleeing the Famine. She carried emigrants out to Canada and brought timber back.

She made her maiden voyage from Blennerville, Co. Kerry to Quebec, Canada in 1848 with 193 passengers on board. She transported 2,500 Irish emigrants on 16 transatlantic voyages to North America.

This ship is an authentic replica of the original Jeanie Johnston. The re-creation of the ship was one of the most ambitious maritime heritage projects ever undertaken in Ireland. Following extensive research in 1992, the ship was designed by Fred M. Walker, former Chief Naval Architect with the National Maritime Museum in Greenwich, England. and Tthe re-creation project was modelled closely on the restoration of the 17th century Dutch ship, the Batavia.

A fitting memorial to Ireland’s Famine victims She was built at Blennerville, Co. Kerry, a project which took 6 years and was completed in 2002. Over 300 shipwrights and craftsmen were involved in the construction.

In order to be seaworthy, the ship had to comply with Irish and international maritime laws so she does incorporate some modern elements, like navigational technology and safety features, but, wherever possible, she has remained true to her original form.