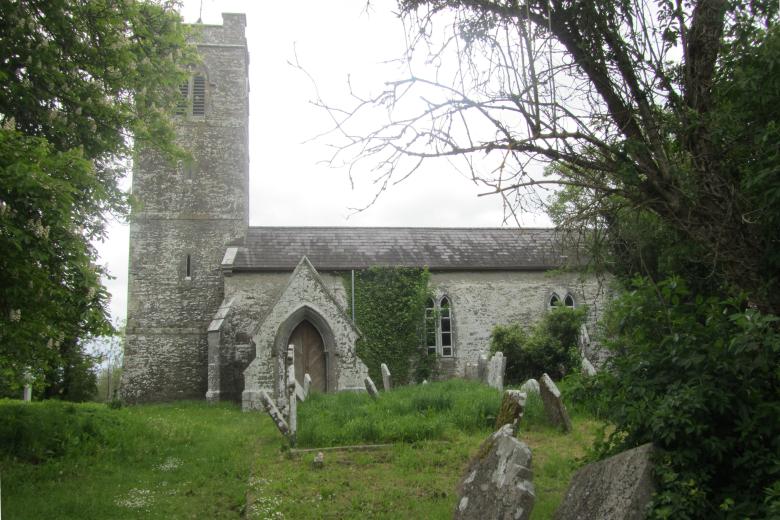 Kilshannig Protestant Church. This was, originally, a Catholic church and was located above the flood plain and a few hundred metres from Ath na Cealla. The original was built by the Norman invaders in about 1200 AD and it was built along continental norms to accommodate whole congregations. The parish thrived under the sponsorship of John de Cogan,a Norman lord who controlled much of County Cork and was expanded to take in a much larger area and became one of the bigger parishes in the diocese at over 27,000 acres. In 1581  the incumbent Catholic Priest was removed and a vicar was appointed who recognised the King of England as head and thus the parish became an Established Church Parish and a Church of Ireland parish later.  During the Munster Rebellion in the early 1580’s,  the church was destroyed but was restored by 1615 only to be destroyed once more during the 1641 Rebellion. The present structure dates back to 1719 when major restoration and expansion took place and this is the building that we see to-day. Due to a dwindling congregation the church was deconsecrated in 1882 and handed over to Cork County Council who have maintained it since. One of the most famous people to be baptised in this church was Thomás Russell on 20th.December 1767, a leader in the 1798 Irish Rebellion who was hanged and buried in 1802 in Downpatrick. He became better known as “The man from God Knows Where”. Kilshannig Church baptisms ,marriages and death records go back to c. 1730.

Glantane Catholic Churches. As the penal laws were relaxed towards the end of the 1700’s Catholics began to long for  proper places of worship and in 1820 permission was obtained from the Mallow Resident  Magistrate to build a Catholic Church in Glantane. The Lombard family  provided a site in Brittas townland where the current church now stands. This was nine years before Catholic Emancipation and Catholic Churches then had to be discreetly hidden away  so as not to offend the sensibilities of the protestant community. The church erected was a small, low, thatched cruciform building  that opened in 1821.  A belfry was built  near the church  and the lower room of this  was used as a store. The Catholic parish now needed a name and Glantane was chosen as Kilshannig was already taken. This church became inadequate after Catholic Emancipation and  in 1877 the newly appointed  PP , Fr.Lynch, called a public meeting to progress the building of a new church as he considered the old one too small, dilapidated  and not fit for purpose. He tried to secure a site beside the village but to no avail and so the old church was demolished and the new one  build on the site. An interesting anecdote has survived from that time which relates how the PP was refused a site beside Glantane village for the new church by the O Mullane family and he put a curse on them that “the day will come when there will be no mullane in Glantane” and true to form that day arrived in the 1970’s when the last one died. This  new and present day church opened in 1878 and was dedicated to Saint John the Baptist. The  bell was also dedicated to the same saint with the following inscription”SANCTE  JOANNES  BAPTISTA ORO PRO NOBIS 1877”. Bells were sometimes dedicated to a different saint. There is no account of  the old bell. Building a large, modern church presented major financial difficulties especially in the aftermath of the devastating great famine.  Local quarry and gravel pit owners rallied round and the owners of Eden Hill House donated a large sand bank on the River Blackwater for the building. There are three beautiful stained glass windows behind the sanctuary, the images represent Mary,Jesus  and Saint John the Baptist. These windows were manufactured in Munich and were commissioned and installed by Fr. Bartholomew Shinnick PP in 1905 who happens to be buried in the churchyard. The original Stations of the Cross were financed by weekly collections from the workers in Lombardstown creamery with a donation also  from Dr. Ryan and the present sanctuary lamp was presented by the creamery itself. The church had a gallery at the rear which was removed in the 1960’s. Glantane Church was the principal church in the parish until the new church in Drommahane was built. It should be noted that foundations were uncovered when digging some of the graves in the churchyard but these, most  likely, relate to the 1821 church or bell tower. There was a large statue of Christ the King in the church  yard which was removed and buried there sometime in the early 1960’s.

Kilpadder Catholic Churches. The Kil in the name indicates a church there pre Norman times but the Padder indicates a post Norman influence, however, there was a church there before the penal laws and this was a small thatched building that had deteriorated to a ruin during the penal times by 1820 when a replacement was proposed. Glantane went ahead in 1820 and Kilpadder was delayed until 1836. There were strong objections mainly from the dominant protestant community and it seems that a few attempts were made before 1836 to build but the efforts were sabotaged. A more favourable site was sought but permission was refused and the building went ahead on the old site which was an old disused gravel pit. This church was replaced by St. Peters in Drommahane in 1969 and so the name lives on in the area. Colonel Carrol-Leahy donated a beautifully crafted  silver sanctuary lamp to Kilpadder church but, unfortunately, this was removed to Cobh Cathedral, when Kilpadder was deconsecrated, where it proudly sits to this day. The old church was demolished in 1987 and the site is retained as a place of prayer and as a Garden of Remembrance. The Carrol-Leahy family grave is located in the grounds and a number of priests are also buried there.

Bweeng Catholic Church. The first church in Bweeng was built in 1841 and appeared on the 1842 OSI map of the area. This was a long, rectangular, thatched building placed at right angles to the main road and beside the lane that became known as Chapel Lane. The church that appears on the 1907 OSI map is totally different and resembles the current one. Local knowledge suggests the old church was significantly modified in about 1900 AD when the main aisle was added. It is significant that the bell has the year 1902 embossed on it and it can be assumed that this was the year of the upgrade. There were only enough seats initially, to fill the wings near the altar and there was a penny donation required for their use. This area became known as the Pews while the people in the main aisle had to stand. The new altar was sponsored by Eliza Horgan who is buried adjacent to the main door.  Two small brass gates that became known as “the golden gates” were donated to provide access to the altar and these were later converted to the current ornate kneelers. The church was re-roofed in 1957 and a community hall was built in advance so that church services could continue locally. The individual Stations of the Cross were sponsored by local families to whom they were originally dedicated. A most unusual burial took place in 1957 when the large statue of Christ the King that stood in front of the church was laid down in a straw lined bed in the car park area and covered over where it still lies buried.

It should be noted that at least three Mass Rock sites existed in the parish during the penal times at Cill Cuillín, Leaba Caillí and in Carrigcleena. I hope people will find this very brief history of our parish and churches interesting