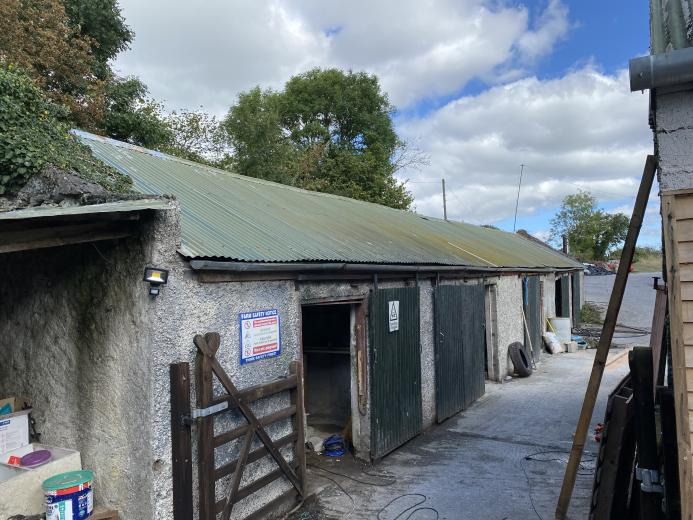 After many years of genealogical research my younger sister, Christine, and I (Joe) finally traveled to Ireland to visit the ancestral site of the Daly farm from which our gg grandparents (Peter F Daly and (Bridget) Joanna Dunn) emigrated to Berkshire County in Massachusetts, USA with their five children.  Initially we only had information passed on to us from some of our uncles and a few newspaper articles about our great grandfather, Peter Francis Daly (Jr).  Several years ago a trip to the Mormon Family History Library in Salt Lake City, Utah led us to the fact that Peter F Daly was from Eglish, Co Offaly.  Progeneologists from Ancestry.com further assisted in digging deeper into the available Irish data.  Research into Griffith’s 1841 Valuation led us to a plot of land in Annaghmore and Annaghbeg in the Barony of Eglish.  Maps associated with Griffith’s Valuation (via johngrenham.com) helped us identify the same plot of land on a modern (current) map of the same area.  At this point I was totally lost as to how to identify an address for this particular farm. This is where Ireland Reaching Out came to the rescue.  Through their Facebook page I connected with a man by the name of Angelo Jose.  He not only found me the correct address for the farm (now owned by Pat Heffernan), but also put me in touch with Pat’s neighbours, the Dooley family.  I wrote a letter to the Heffernan’s explaining my “mission” and asking if we might visit the farm on our upcoming trip to Ireland.  We were generously welcomed to the farm via an email from Majella Yeates Dooley who is the Heffernan’s neighbour.  At the same time as this we heard from Margaret Hensey who is a volunteer with the Ireland Reaching Out (Ireland XO) group.  Margaret offered to meet us upon our arrival in Eglish/Drumcullen.  She also sent us some information about our family taken from ‘Eglish & Drumcullen – a Parish in Firceall” publish by the Firceall Heritage Group.  [With this information I decided to join the Offaly Historical Society and also purchase a copy of this book.]. Now we were all set to begin our adventure.

On Saturday, September 10, 2022 we left Dublin to begin our visit to Offaly.  We had hired a driver and car to take us to Eglish.  Our driver was a gentleman from Co Meath named John Keelan.  John was a totally delightful guide.  Although we got a little lost on our way, Margaret Hensey was on the phone helping us to arrive safely at our destination.  We finally met Margaret at St. James Church in Eglish.  [Our family belonged to the the Catholic parish of Eglish/Drumcullen which included St. James Church and St. John the Baptist Church. Our gg grandparents were married there in 1827 and their children were also baptised there.]. Margaret greeted us with a “thousand welcomes” and even a hot cup of Lemsip for my sister.  We toured the church and cemetery and then moved on to St. John the Baptist Church in Rath.  This is most likely the spot where our family worshipped as it is closest to their farm.  Next Margaret led us to meet our host, Pat Heffernan, who was waiting roadside to take us to see the ruins of St. Barrind’s Church & cemetery along with the nearby ruins of a Norman castle located at Drumcullen/Holly Ridge.  At long last we were ready to travel to Pat Heffernan’s home and farm.  There we met Pat’s sister, Mary, and neighbours Eamonn and Majella Dooley along with their lovely daughter, Aoife.  Once there the biggest surprise of all was the fact that the original Daly homestead was still standing!  It was an absolute thrill to see it, touch it, and actually be inside of it. Although Pat now uses it for storage, he explained to us where the kitchen, family room, bedroom and stable were located along with the original road that passed right in front of the house.  Pat also took me for a ride all around the farmland and even provided some of the home turf for us to bring home with us.  Pat also provided us with some coffee and a feeling of belonging to his family.  We felt like we had known the Heffernans and the Dooleys all of our life!  [It’s interesting to note that our widowed great grandfather ended up marrying the widowed Sarah (Dooley) Fogarty from Eglish back in the US.]. We ended our day with afternoon tea at Kinnitty Castle.  Although we went on the next day for a six day tour of Ireland with the company My Ireland Tour, nothing could compare with our visit to Offaly.  The assistance of so many Irish “angels” made this all possible.  We have never encountered such hospitality before and will always treasure this memorable trip to our home.