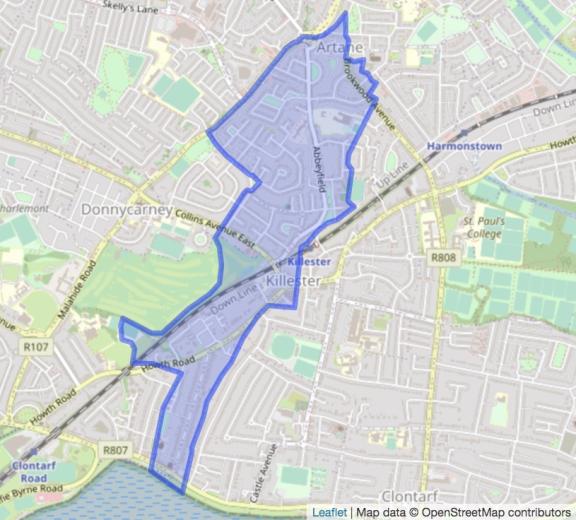 Killester is a small, largely residential suburb of Dublin and lies on the Northside of the city, between Clontarf, Donnycarney, Raheny and Artane, and it falls within the postal districts of Dublin 3 or 5.

St. Anne's Park lies just beyond Killester on the Raheny / Clontarf side. The area lies either side of the Howth Road, parts reaching as far as the Malahide Road, and is also served by Collins Avenue (East).

Killester has been noted in city and church documents going back many centuries, with variant spellings such as "Quillesra" (St. Laurence O'Toole) and "Kylestre", and was the site of both an early church and a later convent or monastery. The name probably means "Church of (St.) Esra". The ruins of a religious building still exist, and nearby there is a modern convent, with an attached school.

The manor of Killester was granted in the twelfth century to one Adrian le Brun. In the fifteenth century, it was owned by the White family to whom it passed by inheritance to the St Lawrence family , Barons and later Earls of Howth. In the seventeenth century, it belonged to the Cootes, a branch of the Earls of Mountrath.

Today there is a Roman Catholic Parish of Killester. The current Roman Catholic church, on the Howth Road, opposite St. Brigid's National School began construction in 1924, and was consecrated in 1926. For many years, it was Parish Church for the combined parish of Killester & Raheny. It was lengthened in 1952, and a new Resource Centre was built alongside in the 2000s. Notably, the church holds a relic of St. Brigid, Ireland's secondary Patron Saint; the fragment of her skull was brought from Portugal in 1928. Alongside the church is a parish resource centre, opened in autumn 2004, with multiple rooms and a coffee shop overlooking the church's peace garden.

The old Parish of Killester in the Church of Ireland (Parish of St. Brigid) was merged with Clontarf Parish in 1686 (church located on nearby Seafield Road), and the combined entity still serves the Anglican communities of both areas. A new parish centre was built beside the parish church in the 2000s, to serve the needs of parishioners and, as capacity allows, the wider community of all faiths.