Kerri Ferguson, from Australia, has a varied and colourful Irish heritage. She has spent many years researching her Irish family history and has documented her findings in a soon-to-be-published book. Last year she travelled to Ireland to film some of the significant places of her ancestors' stories, and Ireland Reaching Out was there to lend a local hand. 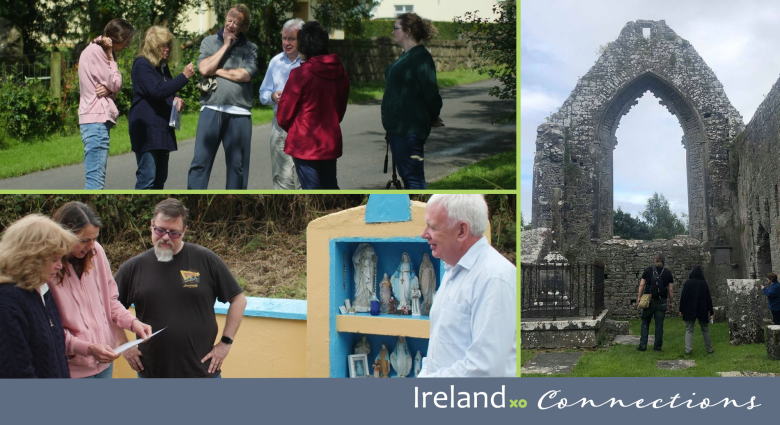 After having led a somewhat unusual life, I had been encouraged many years ago to write a book.  However, it soon became clear to me that some of the reasons I had experienced what I had, may be contained in the lives of those who went before me.

My father’s ancestors were all so proudly Irish but had left their land either by force or by necessity because of poverty, no doubt a similar story shared by so many descendants of so many Irish today.  Some of my father’s family had been cruelly transported from their home as convicts, guilty, with each one doing little more than standing up for what they considered was right.  Others had left in search of a life that held far more promise than what they ever imagined their homeland was ever going to be able to offer.  Each story was poignant and, in many cases, heart breaking but I became very aware of how the lives of each of them had so directly affected my own.

When my manuscript was picked up by an American Media Company who expressed an interest in publishing it was decided that a trip to Ireland to make some promotional videos in preparation for the release would be beneficial.

Pastor Chris Rosebrough and his crew from Pirate Christian Media, an arm of Fighting for the Faith in the United States, first met up with me for a Conference in Wales and then we all travelled across the pond to my beloved Ireland to visit places which the film crew had graciously permitted me to select.   In the weeks leading up to the visit, certain people in Ireland had been advised of our visit and had done all possible to make sure our visit was able to provide all that the crew needed.  We had just four days to film the promos and to also visit other relevant places to my family story.

In Roscommon we were met by Marion Harlow of the Roscommon Historical and Archaeological Society who had been so helpful in the lead-up to the visit in providing us with information in assisting us to film near the courthouse in Roscommon where one of my 2x great grandfathers, Patrick Mulry, had been tried for swearing an unlawful oath by the Special Commission in 1831, convicted and transported to New South Wales, after being sentenced to “Life beyond the Seas”.  Marion’s patience was unending as she directed us to possible areas for filming and waited patiently as lighting and other details were attended to.  When in need of other locations Marion with her impressive knowledge was able to lead us to the old Roscommon Priory which proved to be a perfect backdrop for more filming.  Marion’s generosity in providing her time and her unending patience was so very much appreciated. 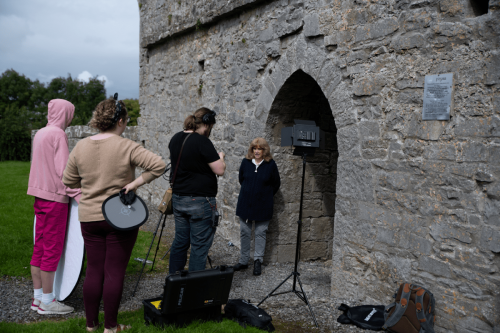 Setting up for filming at the Old Priory in Roscommon.

Our next stop the following day was the Kilmurry/McMahon Parish as the crew found themselves doing that activity familiar to most avid genealogists, i.e. crawling around on hands and knees reading the inscriptions on gravestones.  Locating and photographing the gravesite of my Ferguson ancestors was a task that had to be achieved before the black clouds threatened to curtail activities.  The Ferguson family lived for about 100 years in a cottage which still stands today in Drumdigus. All members of the family are interred on the site at the Kilmurry/McMahon graveyard but only the inscription for my 2x great grandmother “Kate” is detailed on the stone as the family was too poor to ever upgrade the stone.  My 2xgreat uncle, Patrick Ferguson (1862-1941), is also buried on the site and was a contributor to the Schools Collection undertaken in the late 1930’s with the assistance of Ireland's school children. All of Patrick’s siblings had emigrated as part of the great exodus from Clare, one sister to Brooklyn and another sister and brother (my own great grandfather) to Sydney, Australia.

The team then visited the Children’s Burial Ground at Tullycrine a place which had long since fascinated me and which I believed might hold the remains of members of my own family.  The visit to this site was truly one of the most moving experiences one could ever undertake. We had stopped that morning to purchase flowers in anticipation of our visit to the final resting place of these little ones and set about placing a flower on each grave that we could find. Some marker stones are so deeply hidden and covered by bracken that it is quite a task to try to locate them. Other little graves are clearly outlined, and such an intensely sad reminder of a practice carried out in less-enlightened times. But nothing could have prepared any of us for the visit to this site and it is with utter gratitude that we were able to view this place that the work of dedicated Irish volunteers has ensured will never be lost. 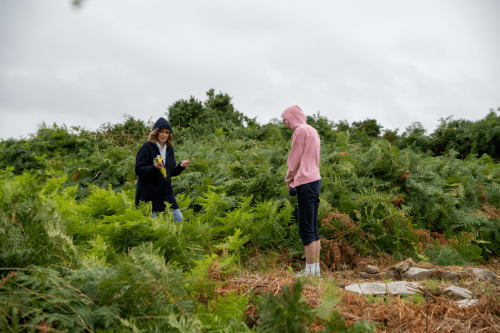 So many little marker stones hidden amongst the bracken.  Such a moving place to visit. And so many tears, mixed with the gentle rain of Ireland.

A ride down the road and once again passing the Ferguson cottage I was reminded of the past political disagreements which had entangled my family of which this little cottage had fallen victim when it was bombed in June of 1918.

Our final destination in our pursuit of my family story was to seek the ground that another of my 2xgreat grandfathers had trodden. John Hogan had been the Coachman/Groom on the great Glenomera estate in Clare owned by the Arthur family. In anticipation of our visit we had been in contact with Jane O’Halloran Ryan of Ireland Reaching Out who had been of great assistance in helping us to organise our visit. Though I had previously been to the locality of my Ferguson ancestors, this was to be my first visit to Hogan country. Driving to the place where we had agreed to meet Jane, it was somewhat breathtaking to see the names that had become so familiar to me, through documents and family stories, confronting me on local signs somehow welcoming me “home”.

Jane introduced us to John Moloney as between them they had pre-arranged to meet with us and show us around the relevant area. John’s knowledge of the old estate was so helpful, and we bounced information off each other as he was able to fill in missing pieces for me and I was able to relate to him stories of those who had left their homeland so long ago.  The hospitality of the Irish volunteers who gather us in when we return and assist with our search for our roots cannot be overstated. John was able to tell us stories about past times in the area and point out places of interest. A local gentleman who now owns one of the cottages in which a Hogan relative once lived, joined our group and invited me to familiarise myself with the little cottage which he now owns. 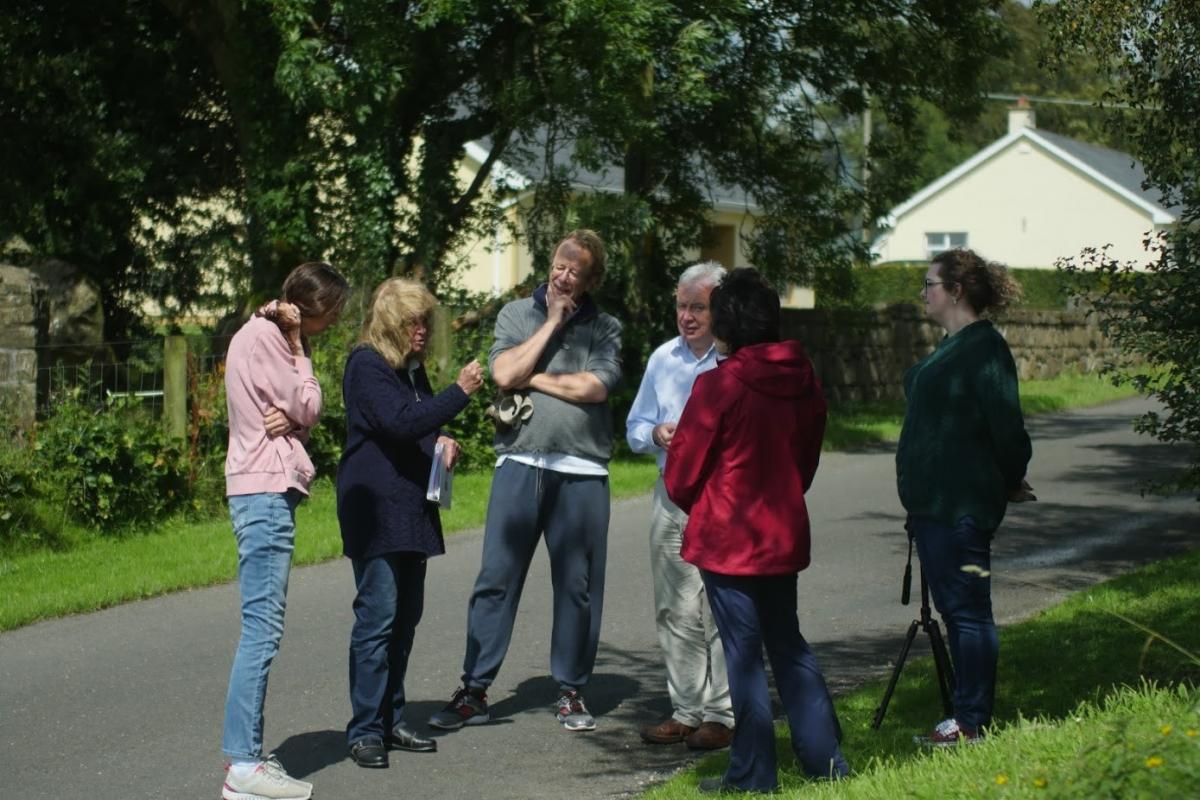 My first moments on Hogan ground with two members of the film crew, John Moloney, Jane Halloran Ryan (Ireland Reaching Out) and a local cottage owner.

Much to our surprise, John informed us that we had arrived, serendipitously, on a very special day in Blackhill which was the feast day of the patron saint of the Holy Well. John and Jane took us to the Holy Well which was tucked away in one of the most beautiful locations imaginable. John’s knowledge of the Holy Well and the history of its importance to the locals was evident as he related different aspects of the place and the activities that took place there over the centuries. The crystal-clear waters ran swiftly right through the centre of the location as we spoke and we were invited to sample them which we did, observant of the tradition of the Holy Well which so many had carried out before us.

After we had heard the history of the Well so ably provided by John, Pastor Chris Rosebrough of Fighting for the Faith stepped forward and said he would like to say a few words.  He then conducted a short service and preached the Christian gospel to the small company of gatherers.   We were all in total agreement later that this was one of the most beautiful services we had ever experienced and certainly for me personally it was a more meaningful service than I have ever attended in any great cathedral or church anywhere in the world.  It was impossible to not think about all those believers who had gone before us over the centuries and stood in that place with whom we had now connected in that special hour.  How many of my Hogan ancestors from the Glenomera estate had stood in the very place I was now standing, was a thought that connected me to all those believers who had gone before me there. 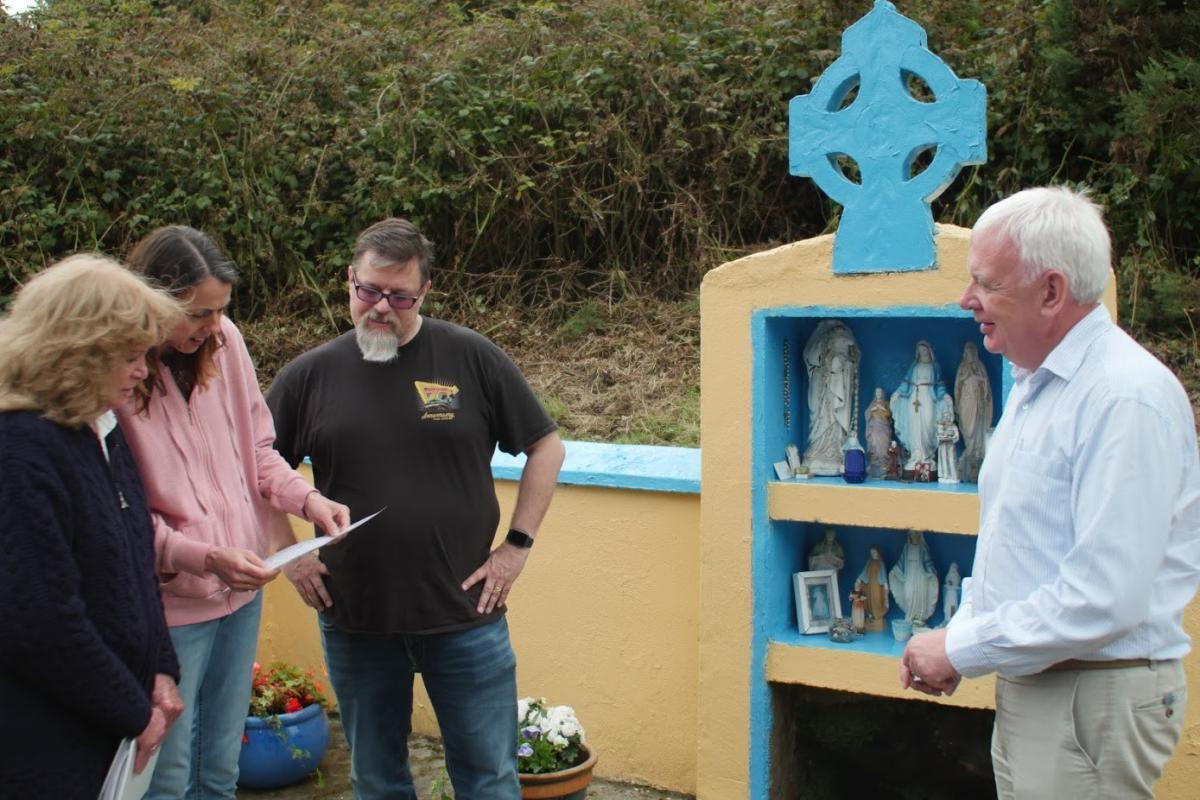 John Moloney (right) explaining the history of the Holy Well at Blackhill to Pastor Chris Rosebrough, Barbara Rosebrough and myself.

Our thanks to Marion Harlow, Jane Halloran Ryan and John Moloney for assisting us with this venture and without whose help our project could not have unfolded so pleasantly and so efficiently.  The time and patience of all these Irish volunteers who step up to offer hospitality to those returning to Ireland to learn of their history and re-trace family footsteps is appreciated by all who have been served by them.  Thank you.

Are you inspired by Kerri's story? A simple post on the IrelandXO Message Board may be all you need to get started on your journey. Or perhaps you have already made the trip "home" to Ireland to visit the place of origin of your ancestors? If so, we'd love to feature you in an upcoming IrelandXO Connection Story. Contact us at info@IrelandXO.com to share your story.