Maine's Steve Luttrell, Portland-based poet and editor of the Café Review poetry journal, came to Ireland in May to see the birthplace of his great-grandfather, Michael Skerritt, and to launch a special Irish issue of his journal. 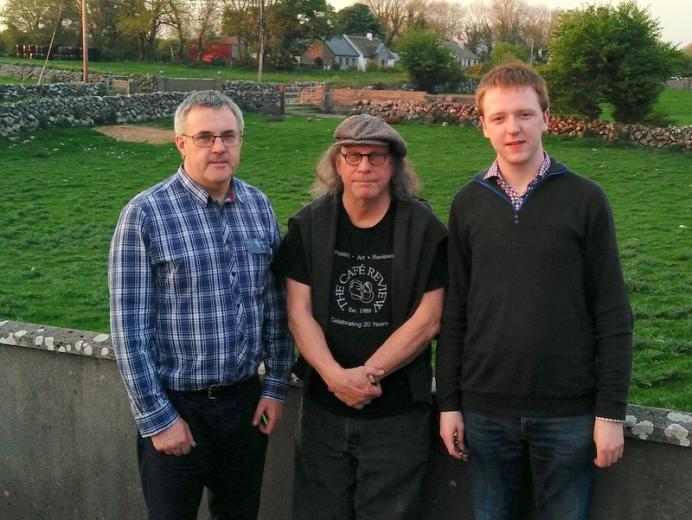 Maine poet Steve Luttrell, editor of the Café Review poetry journal, visited Galway recently to see the birthplace of his great-grandfather, Michael Skerritt, and to read from his latest collection, Plumb Line. Steve was met by relative and Annaghdown Ireland XO volunteer Paul Greaney, and Gerard Naughton, Lackagh Ireland XO volunteer, who also has family connections to the Skerritts. They visited the site of the old Skerritt home, met with several Skerritt cousins, walked through the village, and visited the cemetery in Corrandulla where Steve's ancestors are buried.

Steve's great-grandfather was Michael Skerritt (1846-1912), son of Michael Skerritt and Mary Cunningham of Kilgill. Michael was one of many Annaghdown natives who went to Portland, Maine, in the second half of the 19th century. He married Bridget Curran there in 1872 and they had a large family, one of whom became Steve's grandmother. Michael's brothers Martin and Patrick stayed on the family farm, and their descendants still live there and farm the land. Another brother, John, and two sisters, Catherine (Kelly) and Bridget (Dolly) also lived nearby. Their younger brother William also went to Portland and married Mary Burke from Ardgaineen, the next townland to Kilgill. Their youngest sibling, Mary, went to Portland in 1891, shortly after her marriage to Martin Greaney, also of Kilgill.

A special Irish issue of the Café Review was launched at the May Over The Edge Writers' Gathering, held on 13 May in The Kitchen at Galway City Museum.