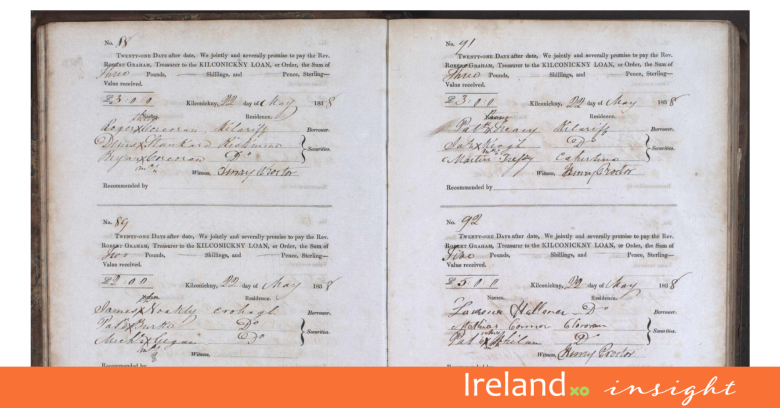 In the 1720s Dean Jonathan Swift gave £500 to be lent to the poor people of Dublin in loans of under £10 each. Loans were only granted to people who had projects that promised a high return. In order to be granted a loan, you needed two guarantees most often neighbors. Hailed as low-cost forms of relief, other institutions around the country followed, giving loans for productive purposes, like buying a cow or farm tools, but not for unproductive purposes like paying rent. This was the beginning of the Reproductive Loan schemes.

Several such schemes developed around the country and each was administered locally, on a voluntary basis. The schemes received donations and interest-free loans from benefactors. Small loans were given to the industrious poor and by the in the mid-nineteenth century it is estimated that 20% of Irish households were availing of such loans. The loan schemes began competing with the banks, offering low-interest loans to borrowers and good interest rates to ‘depositors’. Throughout the nineteenth century, deposits at banks were giving between zero and two percent interest. The loan funds were giving 6% until 1843 and 5% after that. Funds which were well managed had low rates of default over a long time. For example, the Ballyjamesduff (Co. Cavan) loan fund had bad debts of only £313 after 80 years, during which time it had lent almost £1 million.

The London subscriptions to the relief of famine in Ireland in 1822 exceeded expenditure and the excess was used to establish the London Charitable Association, commonly called the Irish Reproductive Loan Institution. Under this Institution, local loan funds in Ireland, administered locally, were established. These local loan funds encouraged deposits (or donations) and gave out small loans, not very different from the Credit Unions of today. The profits from the loan fund were reinvested or given to other charitable organisations in the area. The loan funds took a few years to get established and by 1838 there were only 50 such funds in Ireland. However, in the following few years there was a dramatic increase in the number of loan funds and in their activity.

Twenty-five such funds were established in County Galway, and by 1839 there were about 2,600 loans given out at a total value of £11,500. The loans were generally about £1 to £3, required two guarantors and were repayable in 20 weekly instalments, with an interest fee of 6 pence in the pound payable at the end.

One such loan fund was established in Kilconickney, a civil parish in east Galway, which is now a part of the church parish of Carrabane.  The Kilconickney Loan Fund covered the surrounding parishes, including Killarive in the parish of Kiltullagh, and the records for loans given out and the guarantors for those loans exist for the years 1838 to 1848. These loan fund records add substantially to the 1821, 1828, 1844, 1852 and 1855 records for the townland.

Learn more about how to find your Parish HERE

According to the Griffith Valuation house books of 1853, there were 25 houses in Killarive. Of these 25 families (presuming one family per house), 15 were involved with the Kilconickney Reproductive Loan Scheme, either as a borrower and/or a guarantor for the loan of a neighbour or family friend. The loans were between £1 and £3 and according to the loan books available, were paid back in regular weekly installments. Some people, like Bryan Ward or James Keogh, were involved with up to 30 loans as either borrower or guarantor, while others, like Mary Mannion, only received one loan. Of the 15 families in the townland who received loans between 1839 and 1848, nine were living there since 1821. While of the 12 families new to the area since 1821, six were involved with the loan system.

The Tithe Applotment Book records for the townland, which recorded farmers with one acre or more, showed 21 families in the townland. Fifteen of these 21 families were involved in the loan scheme. This shows an awareness of the system among the families in Killarive that was above the national average of 20% of families being involved.

One of the interesting facts about the loan scheme records is that there were 12 people who stated in the loan records that they were from Killarive, but were not recorded in the 1853 Griffith Valuation house book records. Four of these are recorded in other records from 1853, but the other 8 are not recorded in any other records. It is possible that they came and went again between record taking, although there are other possibilities, as discussed later.

The Kilconickney Loan Scheme seems to have finished in about 1848. In general, the loan funds were not well monitored and the devastation of the Great Famine years would not have helped with the management of the schemes. Some of the abuses of the schemes seen in the Killarive records included:

If these abuses were replicated in other townlands the system would be under strain, particularly when the Great Famine struck and there were pressures from other sources. 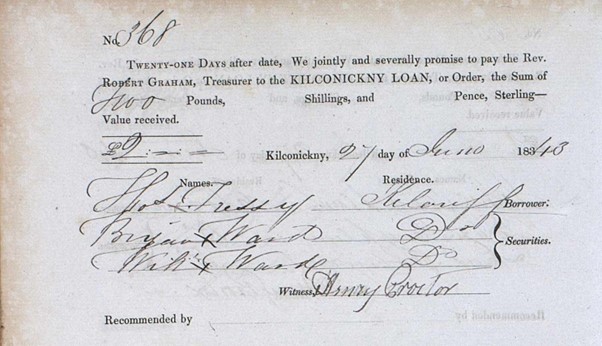 Image: The record of a loan of 2 pounds to Thomas Tressy of Kilarriff, guaranteed by Bryan Warde and Michael Warde of Kilarriff in 1843. Source: The National Archives, Kew, UK. Also available at Findmypast.ie.

In 1853 an assessment of loan defaults was made. Assessors visited each townland where there were default loans and assessed the possibility of the loan being repaid, even at that late stage. They assessed the following:

Although brief, these records of 1853 give a valuable insight into the townland shortly after the Great Famine. Of the 13 people in Killarive with default loans, 3 were dead, 2 did not live in the townland, 2 had emigrated to America, 4 were poor and 2 were in comfortable circumstances. See the detail in Table 1. 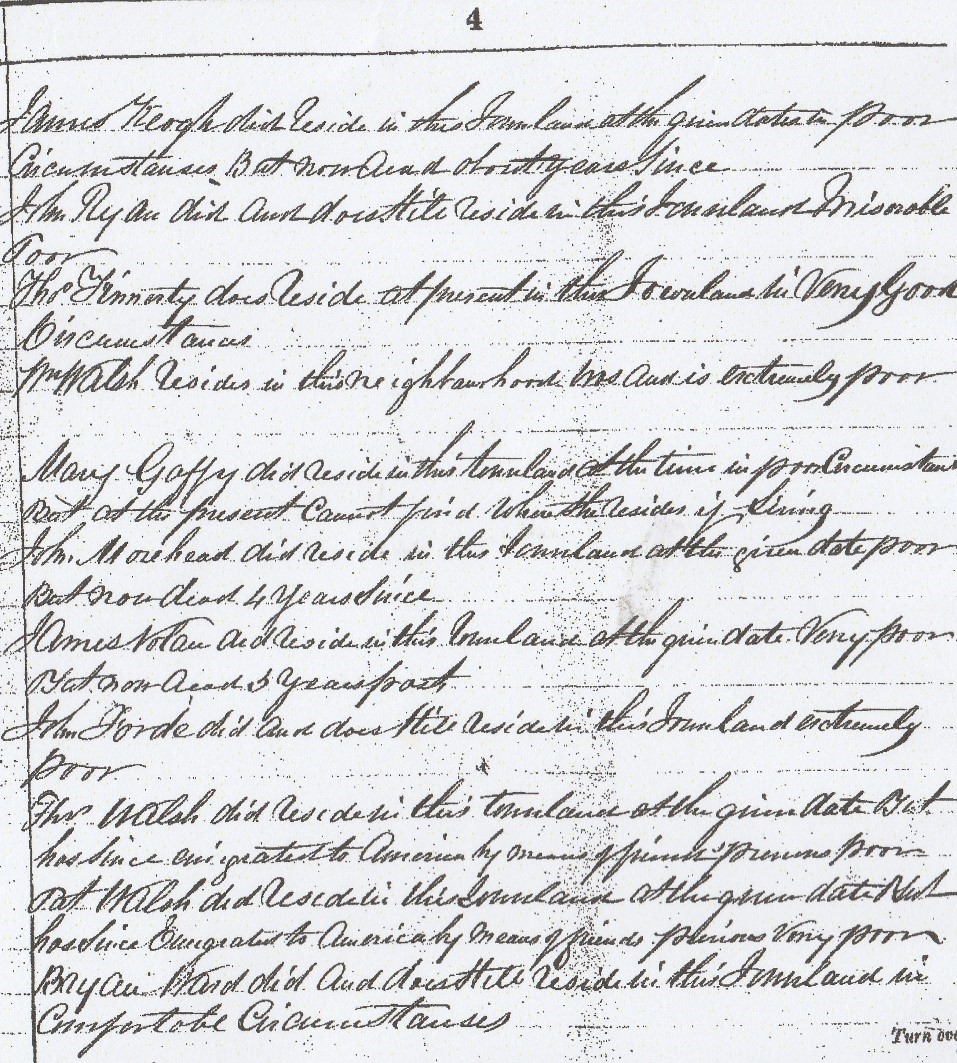 The records from the Reproductive Loan Scheme, particularly the assessment records from 1853, can give valuable family history information not only about family but also about the neighbourhood in which people lived. Living conditions, the source of money for emigration and year of death can be obtained from them. Such records are not available for everyone or every townland. The records add a 'bit of flesh' to the other 1821, 1827 and 1853 records that tend to be little more lists of names.

These are the locations of the loan scheme records. There are literally thousands of records for each area. We suggest getting a free 24 hour trial to explore the records for your townland. It's important to note that these records are only available on FindMyPast.ie, as 'Poverty Reilef Loans 1821-1874' and on Ancestry.co.uk as 'Ireland, Sustainability Loan Fund, 1812-1868'.

This piece has been kindly written and researched by Kieran Jordon, Ireland Reaching Out Volunteer for Cork.

Kieran has been researching his family history for more than 30 years. Having retired from his scientific career in 2019, he has focused on   two areas of interest, family history, and local history, topics on which he has published several books and articles. He is a member of the   Irish Family History Society for 31 years. He has been volunteering with Ireland Reaching Out for the last two years, using his knowledge   of sources for research on family history to help visitors to Ireland in the search for their ancestors.

This piece was originally published in the Journal of the Irish Family History Society, volume 34, 2018