From Massachusetts To Magic in Moyrus, County Galway

Jean always knew that her maternal grandmother’s family came from County Galway, but that was all the information she had. So several years ago she made the decision to have her DNA tested – and immediately found a third cousin that lived only 50 miles away! Jean and John’s great-grandmothers were sisters. Her newly found cousin had already started some research and had managed to find out where the family came from in Galway. Jean was so excited! After that, they combined their research efforts to pull their family's amazing story together. 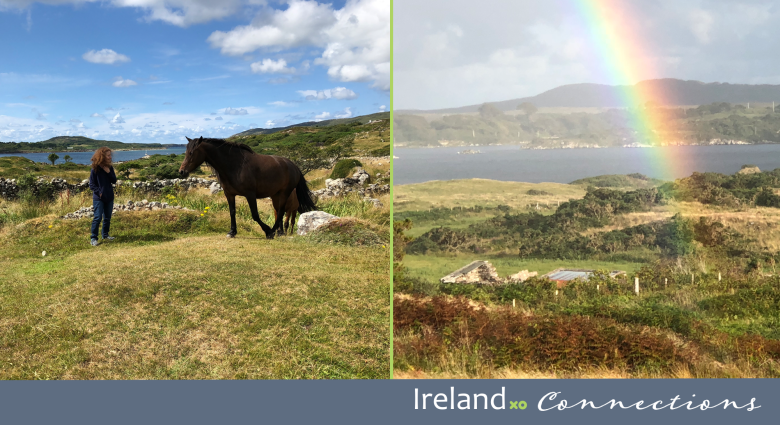 Jean and John’s  family came from Faul Townland in the Civil Parish of Moyrus, on the Ardbear Peninsula, just outside of Clifden, County Galway. Jean was even able to determine exactly where the family farm was  located – the farm that her great-great grandparents, James Fitzpatrick and Margaret Vaughan together with their nine children, left in 1867 or 1868 to sail for Boston. Going even further back, Jean discovered that Margaret Vaughan’s parents, Daniel Vaughan and Honor Conneely (Jean’s great-great-great grandparents) also lived in Faul. The parents of her great-great grandfather, James Fitzpatrick, remain a mystery.

Just six months after finding this information, Jean and her husband, Paul were on a plane to Ireland. Not surprisingly, they headed straight to Faul where after just 15 minutes there Jean was greeted by a curious but welcoming Connemara Pony. But that wasn’t the only local she met in Faul – Jean discovered 4th and 5th cousins still living in the area! 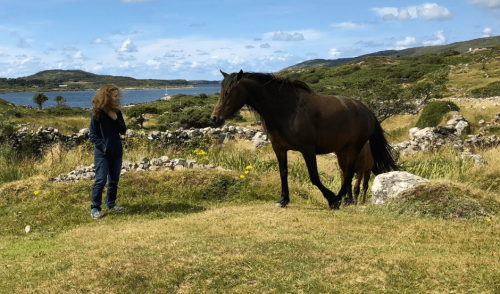 But perhaps the most poignant moment of her trip came when Jean walked to the very place her family's farm was located, put her hands on the ground and spoke her ancestors’ names, all 11 of them – and told them she had brought them home. Minutes later a beautiful rainbow appeared in the fields her family had once farmed! Jean felt their arms around her and in that moment her DNA knew it was home. 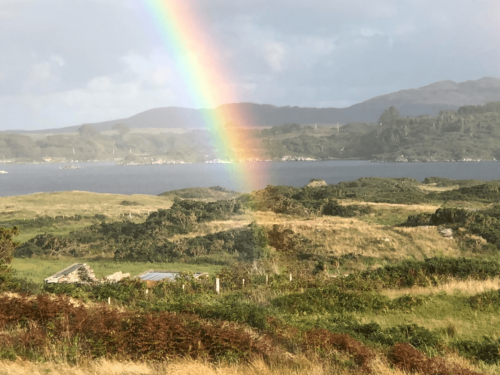 A "hug" from her ancestors, over the fields of the family farm in Faul

And that was just the beginning of their incredible Irish journey. Jean and her husband, Paul also visited Cape Clear Island just off the coast of County Cork – where Paul’s ancestors were from. In fact, her husband’s grandfather, Michael O'Shea was born there and came to Boston around 1910. He lived to be quite old and always stayed in contact with his family on Cape Clear. Some of Paul’s cousins had already visited, but it was their first time to the island. They had contacted some of the O'Shea family ahead to let them know they were coming and they were excited to welcome them to the Island. They surprised Jean and her husband by meeting them at the pier to take the ferry out to the island. Even more family members were waiting at the pier on Cape Clear to greet them.  Jean and Paul had such a wonderful time with the family on Cape Clear, and found them to be such warm and welcoming people. 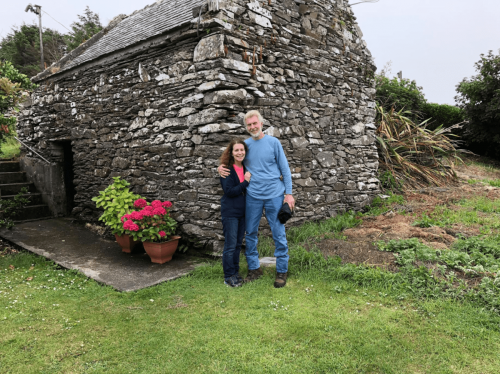 Jean and Paul, in front of a stone building on Cape Clear Island, built by one of her husband's ancestors

All in all, if you ask Jean today to sum up their trip “home” to Ireland she’ll tell you this:  “It was a magical, life changing journey!”

But Jean’s work isn’t done yet. We’ll be seeing her on the IrelandXO Message Board asking for help discovering more about where her maternal grandfather’s family is from in Ireland. No doubt, with the help of IrelandXO volunteers and members, we’ll soon be hearing of another trip by Jean to her Irish roots from this side of the family!

Have you made the trip "home" to Ireland to visit the place of origin of your ancestors? If so, we'd love to feature you in an upcoming IrelandXO Connection Story. Contact us anytime at info@irelandXO.com for more information.