The Transplantation of the Seven Clans of Laois to Kerry

This piece has been written by Dr Michael Christopher Keane and is based on his books From Laois to Kerry (2016), The Earls of Castlehaven (2018) and  The Crosbies of Cork, Kerry, Laois and Leinster (2021) and.  It tells the fascinating story of how the Seven Clans (or Septs) of Laois were transplanted to Kerry 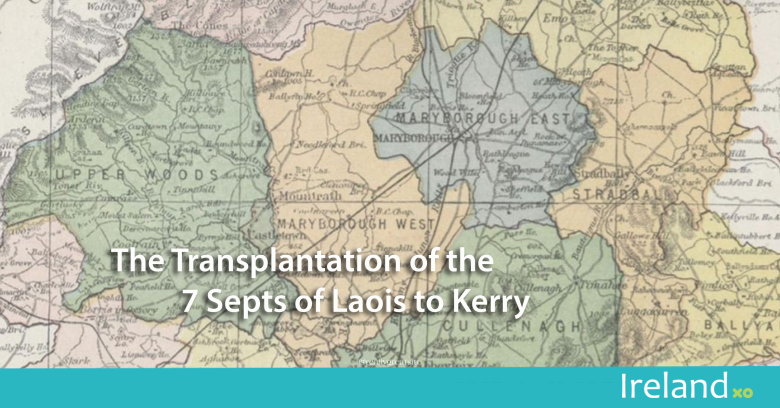 The Clans of Ireland

The historic Irish clan structure became established with the arrival of the Celts who took over from earlier peoples over two millennia ago. As well as a common language (with varying dialects), the Celts had a clan (clann or family) structure such that a multitude of clans became established throughout the country. Each individual member was tied to their own clan through a shared common ancestor reflected through a shared clan name. Each local clan became established within its own defensible territory. The selection of a chieftain by the clan members relied primarily on an assessment of who among the leading candidates was judged best able to protect the clan territory. In total well over 100 clans came to be established and this structure largely dominated in Ireland for 1,500 years until the commencement of the English Tudor invasion and associated plantation in the 16th century. Inevitably a hierarchy of clans emerged with the most powerful exercising a degree of control over lesser clans where military might tended to determine rank. A quite sophisticated legal structure, the Brehon laws, provided general cohesion. Along with their legal and military support, chieftains also cultivated a strong artistic dimension, maintaining poets, bards, craftsmen and musicians as essential components of their close entourage. Clan protective structures ranged from earlier hill forts to later tower houses and castles which reflected the presence of a highly skilled engineering and construction capability.

The clans were confronted by three major events during their 1,500 years of dominance, the arrival of Christianity with St. Patrick in 432, then the Vikings from the 8th to the 10th century, to be followed by the Anglo-Normans at the end of the 12th century. The Irish clans achieved a remarkable reconciliation with Christianity and soon became leading Christian missionaries in both Britain and Europe. Their attachment to Christianity was later reflected in an extremely impressive network of monasteries, the architectural finery of which were sadly destroyed during the Tudor invasion period. While the warlike Vikings established the first significant city ports, they also engaged in widespread plunder. However, they were eventually defeated by the Irish under their clan leader Brian Boru at the Battle of Clontarf in 1014. The Anglo Normans achieved greater long-term success and established great estates presided over by the Earls of Kildare, Ormond and Desmond. However, they too were steadily absorbed by the Irish clan culture to become ‘more Irish than the Irish themselves’. While Irish clan independence eventually came to an end with the great wars with the English Tudors, Stuarts, Cromwellians and Williamites of the later 16th and 17th centuries, the clans have left a lasting legacy as reflected, for example, through the presence of local clan surnames and associated home territories which continue to the present day.

While many Irish clans will always be associated with a particular county or territory, some suffered enormous displacement due to the many major conflicts and plantations throughout Irish history. Thus, very large numbers were obliged to relocate to completely new and distant territories both within Ireland and overseas. A good example of such relocation involves the historic clans of Laois, always known as the Seven Septs, Moores, Kellys, Dowlings, Lawlors, Dorans, McEvoys and Dees (Deevys or Devoys), who were forced to accept relocation to Kerry following their expulsion from Laois precipitated by the plantation of Laois in the late 1500s and early 1600s. Additional transplantation to Kerry at that time of further Laois/Midlands clan members has also been referenced, including Brassils, Nolans, Dillons, Dunnes, O’Carrolls and O’Connor Falys.

There is much evidence that descendants of the original Laois Sept transplantees continue to reside in substantial numbers in Kerry a full four centuries later. This is demonstrable by the continuing prominence of the original Laois Sept surnames in the county, particularly in North Kerry to where most of the original transplantees were settled. As knowledge of the historic Laois origins of sizeable numbers of the North Kerry population was liable to disappear in the modern era, the author, with a Tarbert, Co Kerry McEvoy and Dee presence in his family tree, attempted to assemble the available evidence of continuing Laois Sept surname presence in Kerry through the centuries. This endeavour eventually culminated in the launch of a book From Laois to Kerry.  The following is a brief summary of its contents.

Transplantation from Laois to Kerry

The plantation of Laois and Offaly in the Irish midlands was the first major step in the overall Irish plantation era. From the mid-1500s onwards, the English Tudor and Stuart monarchs sought mainly through military action to establish total control on both islands. It was in this context that in 1556 the counties of Laois and Offaly were renamed as Queens County and Kings County under Queen Mary’s rule. Despite various setbacks the plantation policy was aggressively continued under the long reign of Queen Elizabeth I (1558-1603). While the Seven Septs of Laois vigorously defended their territories, they were eventually forced to succumb to a major transplantation to Kerry.
The key individual in organising the transplantation and the subsequent landlord to the Laois Septs in Kerry was Patrick Crosbie. He operated in close collaboration with his younger brother John who became the second Protestant bishop of Kerry (Ardfert and Aghadoe, 1601-1621). While the true origin of the two Crosbie brothers was shrouded in mystery for centuries, it is now universally accepted that they were in fact of the family MacCrossan, hereditary bards to the O’Moores of Laois. Thus, acting as imposters, the Crosbie brothers changed their names, anglicised themselves and became major landlords through the centuries in both Kerry and Laois. (The author has recounted the colourful story of the Crosbies through the centuries in a recently published book, The Crosbies of Cork Kerry Laois and Leinster, 2021) .

The land of Kerry, like most of Munster, had become available for plantation following the horrors of the Elizabethan-Desmond war (1579-1583) in which an estimated one-third of the population of Munster died, either directly through conflict or indirectly from starvation and disease arising in part from deliberate man-made famine. As well as obtaining property in Laois around Ballyfin where Crosbie castle was constructed, Patrick Crosbie wound up with extensive lands in North Kerry involving the parishes of Finuge, Ballyduff (Rattoo), Ardfert (Kilmoyley), Causeway, Ballyheigue and Abbeydorney in North West Kerry, as well as Tarbert, Duagh and Galey in North East Kerry.  In implementing the transplantation, a precise transplantation agreement, dated March 17, 1607, specifying the rights and obligations of both Patrick Crosbie and the Laois Septs, was signed by each of the seven Sept leaders.

Image: Rock of Dunamase, Co.Laois. The historic seat of the O'Moores of Laois

In tracing the Laois Sept surnames in Kerry through the centuries, their named presence was first recorded in the 1610 will of Patrick Crosbie. Transplanted Laois Septs were then active in Kerry in the Catholic Confederacy uprising of the 1640s, as quoted for example in Crosbie family papers; ‘the O’Dorans,  O’Dowlings, O’Lawlors and O’Kellys swooped down and set fire to Lord Kerry’s new castle and St Brendan’s old Cathedral'.  As there were no censuses or similar assembled records for the 1700s, one must rely on the work of family historians or genealogists. Taking one example, local Kerry historian Martin Moore has traced the Moores to Roger Moore of Moyvane in North Kerry who was a grandson of the O’Moore chieftain who signed the original transplantation agreement.

When it comes to the period from 1800 onwards there are much better records, such as the Tithe Applotment records, the Griffith valuation, the censuses of 1901 and 1911 and recent electoral registers. From these sources it has been estimated that there were around 5,000 persons of Laois sept surnames in Kerry at the time of the Great Famine.  King in his fine book County Kerry Past and Present documents the presence of approximately 2,500 persons with surnames of Laois origin in Kerry in the early 1900s, reflecting the great population decline linked to the Great Famine and its aftermath. Extrapolation from a recent electoral register indicates that around 2,500 persons with Laois sept surnames continue to reside in Kerry to the present time, with the great majority still living in or close to the same North Kerry parishes to which their ancestors were transplanted some hundreds of years earlier. A more precise parish by parish location of each of the current Sept surnames is outlined in the book From Laois to Kerry. When one considers that over 400 years of intermarriage has occurred in the meantime, it is easy to conclude that a substantial proportion of Kerry people, especially in North Kerry, carry an element of Laois Sept DNA in their genetic makeup. In a wider context, the presence in North Kerry in the 21st century of many descendants of the early-17th century transplantation of the seven Septs of Laois is a good illustration of the survival and local rootedness of native peoples.

Are you descended from  Moores, Kellys, Dowlings, Lawlors, Dorans, McEvoys and Dees (Deevys or Devoys) don't forget  to share their story below