In the summer of 2019, Kay and Terry Armstrong travelled from New Zealand to discover more about Kay's Irish origins and to connect with her ancestors' place of origin in Limerick. 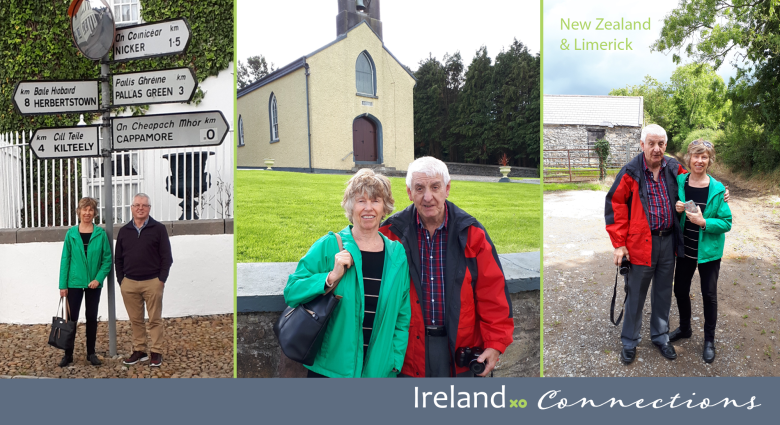 Kay talks about discovering more about her Irish origins:

"For nearly 25 years I have been trying to find out more about my great grandfather Michael Costello. He was born in Ireland (likely Limerick) and emigrated to New Zealand around 1876. I have used three genealogists who have provided information on naming patterns in Ireland and more, but nothing concrete about him, or his Irish wife Alice Hogan who we believe he met and married in New Zealand.

I posted Michael’s photo and my desire to find more information on the IrelandXO Message Board and within a couple of days had two responses. I contacted Tim O'Connell, an IrelandXO volunteer from Limerick, and told him I had planned to visit Ireland in September.  He offered to do some research and meet with me and my husband. The results have been nothing short of amazing. Tim has come up with some definitive information and some possibilities and recommendations. He met  as at the railway station and drove us all around the Limerick area for most of the day.  It was very emotional to see the laneway which would have lead to my great grandmother’s family home."

Tim O'Connell has been volunteering with Ireland Reaching Out for a number of years and helps connect people who are descended from the Limerick area to their place of origin, both online, through the IrelandXO message board, and by meeting them locally when they return. He recalls Kay's visit:

"Kay's great grandfather was Michael Costello (born 1856), but this does not seem to be the name he was born with.  She knew that Michael's father was Patrick and his mother was Hanora Punch from his New Zealand death certificate. There are only about 20 Limerick baptisms in total for mothers called Hanora Punch in the entire 19th century. Eleven of these were for parents Patrick Cosgrove, a labourer from Old Pallas and later Cappamore, and Hanora Punch. The other baptisms are all in the wrong timeframe. Michael Cosgrove served a year in Limerick Prison for assault in 1873 when he was 20.  People seeking assisted passage to New Zealand had to be "of good character" so I speculate that he modified his name so that it would not raise a red flag on his application.

I took Kay and Terry to Cappamore where several Cosgroves still live, according to a person we spoke to that now lives in a former Cosgrove house but unfortunately time did not allow us to reach out to any of them. Next, we visited nearby Old Pallas where Michael Cosgrove was born. Here is a picture of myself and Kay, taken in the village.

Kay's Great Grandmother was Alice Hogan from Glenbrohane so we next traveled to there. I was able to identify the location of the Hogan homestead as indicated in 1852 from Griffith's maps, confirmed by some of the baptismal records which recorded the townland as Raheen. The house the Hogans lived in is long gone and is now in the middle of Woodland at the end of a long boreen next to Hinchy Motors in Garryspillane. One of the pictures was taken there. We also visited Glenbrohane church where Alice was baptised.

Alice Hogan traveled to New Zealand as a child with all of her family. Her mother had married a man called Redmond Condon some months after being widowed. Information I discovered about assisted migration indicates that the New Zealand government offered favorable terms to families to settle in the territory so this was probably a factor."

Looking back at her Irish experience, Kay says: "I was extremely happy with what Tim had done for me.  It was far more than I had expected.  Now I know more, I can research different information and hopefully get the results I have been trying to get for all those years."

Are you inspired by Kay's story and would like to connect with your place of origin in Ireland? You can, with a little help from IrelandXO volunteers! A simple post on our Message Board may be all you need to get started on your journey.