In 2012, Ireland XO helped Marsha Thomas connected with her oldest living relative in Ireland. Since then she has maintained a strong relationship with the community of her Irish Ancestors, culminating this year in the unveiling of an "Information Board", a permanent symbol of her family's legacy in the local area. 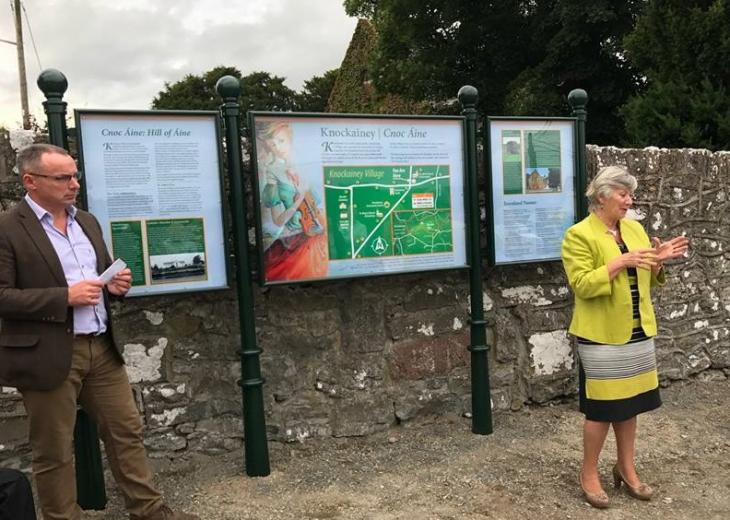 In the Autumn of 2012, I was in contact with Mary O'Grady through the Ireland XO website and she connected me with Martin Cleary, a member of the Knockainey Community Council,  who was able to introduced me to Thomas F. Cooke, my closest cousin in Ireland. Martin was chosen to introduce me to Tommy as he had known Tommy for many years.  The November evening was truly magical.  There was a group of us that visited Tommy that evening, including a Barry cousin, Mary Hennessey from Hospital, Co. Limerick.  He told stories, talked about his life, gave many political opinions, explained that he never knew there was a relative to emigrated to the USA and served tea and cake (among other things) at 97 years of age.  As the evening concluded, he presented me a bottle of homemade poteen, which I brought back to the US.  A truly amazing gift.

After our introduction in November 2012, I kept in touch with Tommy by letter.  Then, in 2013, I was selected to participate in Tar Abhaile – I believe a joint venture with IrelandXO.  It was like winning the genealogy lotto.  My family and I returned to Ireland for filming in June 2013 and had a wonderful time.  I spent additional time with Tommy, although his health was starting to fail.  I met his daughter, Catherine O’Brien, and some of his grandchildren and great-grandchildren.  I also spent time with Martin Cleary and his daughter Carole who introduced us to farm life.  They have become great friends, amazing friends, along with their family.

The Clearys, Cookes, along with Mary O’Grady of the Knockainey Council, had done an incredible amount of work to make both my initial visit with Tommy Cooke and the Tar Abhaile filming incredibly memorable to my entire family.  Because of the contacts I had made, I was also introduced to people who would teach me the local history that added great abundance to my research of the Barry genealogy.

After Tar Abhaile, I wanted to do something for the community that had so graciously and warmly welcomed us.  I was told they needed a color printer for their work and gladly arranged to have one sent.  But before it was sent, I received a message from the Council that perhaps a more permanent record could be made of our common ties to the area.  The “Information Board” was born!  The Council did amazing work for the board – pictures, descriptions, history, maps.  They allowed me to place a dedication on the board that reads:

This historical marker is dedicated to the Barry and Cooke families of County Limerick.  My cousin, Thomas F. Cooke of Knockainey (1914 – 2014) brought the area to life for me.  May those who follow us remember the sons and daughters of this region who helped build America, Australia and many other parts of the world.

It was an amazing community gathering and good example of how Ireland XO has helped to bring diaspora back to their roots, with amazing warmth.

There were three Cooke descendants attending th event from three different continents. Pictures from the right: Catherine O’Brien from Ireland; Loretta Dynan from Australia, and Marsha Thomas from the USA. 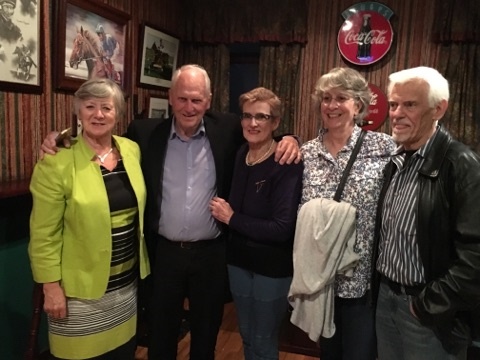 The Knockainey Community Information Board