It is a little-known fact that over 4,000 young women were sent from Ireland to Australia in the mid 1800s. Orphaned and alone, they faced hardship, uncertainty and a completely different way of life.  Their descendants now range in the thousands and much good work has been done in recent years to connect the descendants of these girls with their roots in Ireland.  Barbara Barclay has taken an interest in the girls who left Mayo and here sheds some light on their experiences and how we might help to reconnect their descendants to County Mayo.

The piece below is written by Barbara Barclay who was born in Australia and has lived in Ireland for the past number of years. In 2015 Barbara graduated with a Bachelor of Arts (Honours) in Heritage Studies from Galway-Mayo Institute of Technology, Mayo Campus, earning the Academic Achievement Award for her year. Barbara's main interests are in 19th century Irish and Australian history, migration, and material culture, as well as genealogy and family history. 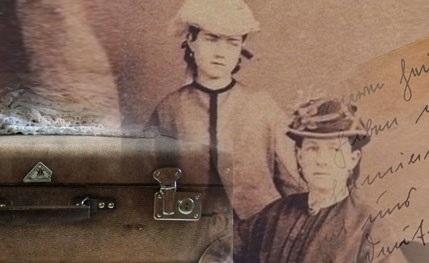 From 1848 to 1850, the Famine Orphan Emigration Scheme, administered by Colonial Secretary, Earl Grey, sent a total of 4,114 young women from 118 Irish workhouses to the Australian ports of Sydney, Port Phillip (Melbourne) and Adelaide. The scheme was devised as a response to the need for domestic female labour in the growing Australian colony, along with the related issue of gender imbalance. This coincided with increasing numbers of young female orphans in the overcrowded Irish workhouses due to the worsening Famine.

As a result, young Irish women were sent to Australia to be hired as domestic servants, and in time to become wives of the colonial settlers. These young women are now celebrated as pioneering Australian women with numerous descendants.

My research focuses on the 137 girls sent from four County Mayo workhouses as part of this scheme: Ballina, Ballinrobe, Castlebar, and Westport. My aim was to discover more about how the scheme was run in County Mayo, using workhouse records and newspaper reports, and to see if I could find out any individual stories of these Mayo orphan girls. 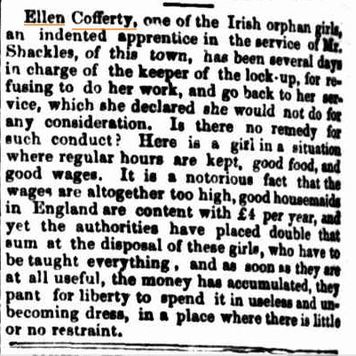 Only a limited number of individual girls are mentioned in the official records and newspaper reports, however, they are valuable sources in terms of building up the picture of the girls’ journeys and arrival in Australia. Workhouse records describe the outfits and personal items supplied to the girls, and detail their journeys from the workhouses via horse-drawn coach and train to Dublin, then by steamer to Plymouth, where they embarked on the ships to Australia. Newspaper articles report the arrival of the ships and occasionally mention the girls by name. The majority of the Irish orphans went on to marry and have large families, and may never again have appeared in the public record. This image shows an extract from an article that appeared in the Sydney Morning Herald on the 1st of March 1850.

It is nearly 170 years since these girls left County Mayo, but echoes of their lives are still here, in their family names and townland names. The next phase of my research is to uncover the stories of the Mayo Orphan Girls from their many descendants in Australia, and to aim to connect them with their Irish heritage, and their places of origin in County Mayo. The story of the Irish orphan girls and their lives in Australia is virtually unknown in Ireland, so I am also making connections with families in Mayo who do not realise that they are related to descendants of these girls.

I connected the Australian descendants of two sisters sent from Ballina workhouse with their Mayo relatives, who revealed that they are the proud descendants of a French soldier who arrived with General Humbert’s troops in the Rebellion of 1798.

Anyone involved in Irish genealogy knows that the lack of records makes family history research incredibly difficult. Local knowledge of placenames and family names, brought together by Ireland Reaching Out, is invaluable in making connections between the Irish orphan girls and their Australian descendants.

My website, Mayo Orphan Girls, provides a summary of my research, and is also a point of contact for descendants of the Mayo Orphan Girls. I would love to hear from any Australian descendants, or from those in the Mayo communities from where they left, who are able to add to their stories.

Every year a gathering at the Famine Monument is held to remember the girls. In 2012 Melissa Plant, a descendant of Mary O'Hara from Galway said that "we had known that my mother had Irish ancestry, but it was whilst I was away that my father found out that my great-great grandmother was an Irish Famine Orphan who had traveled to Australia in a ship. Her name was Mary O’Hara, and at the time she was a teenager from County Mayo, in a workhouse in Galway. She came to Australia on a ship called the Lady Kennaway, which was one of the ships that traveled directly to Melbourne. She worked in a brewery for 6 years 2 months, then married an Irishman and had 12 children, the youngest of whom was my mother’s grandfather...This memorial and the dedication of the people who manage it means a great deal to me and my family. It has reinvigorated my interest in finding out more about my Irish ancestry and learning more about our family history".

A searchable database is available that provides a facility to search by surname, native place, religion and parents' names providing a valuable genealogical resource covering a period when parish records in Ireland are often scarce or non-existent.