Rev Thomas Hand entered upon his duties when the effects of the great famine were being most severely felt. The crochet industry, which is everywhere associated with the name of Clones, was then introduced by Mrs Hand as a means of livelihood for the parishioners 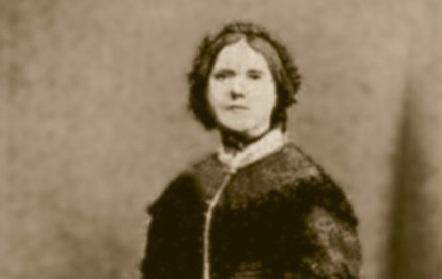 In 2010 I wrote an article for the parish magazine of Bulphan, a small town in Essex telling them that I had been to an Irish crochet workshop in Clones.

In 1847 the Rector of Bulphan, Rev Thomas Hand, and his wife, Cassandra [nee More-Molyneux], left Bulphan to take up the living of Clones. Thomas had been rector in Bulphan since 1828 and Cassandra came in 1831 when they were married and she left her childhood home of Loseley Park, Compton, Surrey. Irish crochet was being taught across Ireland and Cassandra invited a teacher from Kildare to come to Clones. Classes were held in the Rectory and, during her lifetime, the area was indebted to her and the lacemakers for the building of a school house and she also provided an organ for the parish church. Cassandra died in October 1868 and Rev Thomas returned to the living at Compton in 1873 but died a year later.

The Irish crochet industry continued although its popularity was dependent upon both fashion and the economic situation. Fortunately, this hand craft was passed down so that when, in the late 1980s, Maire Treanor was able, with the help of those who had continued the craft and others, to revive the teaching and making of this beautiful lace. Since 1990 Maire has held an annual summer workshop. I attended this workshop for the first time in 2010 and, before going, I employed my interest in genealogy to find as much information as I could on Rev Thomas, Cassandra and their children. I presented my findings in booklet form to Maire and to the Cassandra Hand Centre.

One evening during the workshop we took the Cassandra Trail and visited most of the places that Cassandra would have known. We are, on occasion, invited to visit Bishopcourt which had been the rectory. It is a treat to see the rooms where, probably, the crochet classes took place.

Both Cassandra and the Rev Thomas are buried in a village called Clogh, in County Fermanagh, and we visit the cemetery there. The funeral procession must have taken some time and as Cassandra died in Dublin and Thomas in Compton, Surrey, I wonder how long it took on both occasions to arrange.

It is very good to know that Cassandra is still so highly thought of after all these years. Maire’s book on Clones Lace written in 2000 has been reprinted. It tells the history of lace making in the district, pictures some old lace pieces and gives some patterns of Maire’s designs for Clones lace.

I have made contact with one of her great great grandsons, thus bringing the whole family alive for me.