When newlyweds John Richard Colbourne and Maria Harwood left Dublin, Ireland for Australia in 1857, it would have been hard for them to imagine two of their great-granddaughters making the return journey many years later. But like many with family roots in Ireland, sisters Leonie and Marie did make the trek – all the way from Geelong in Australia – to learn more about their family history. 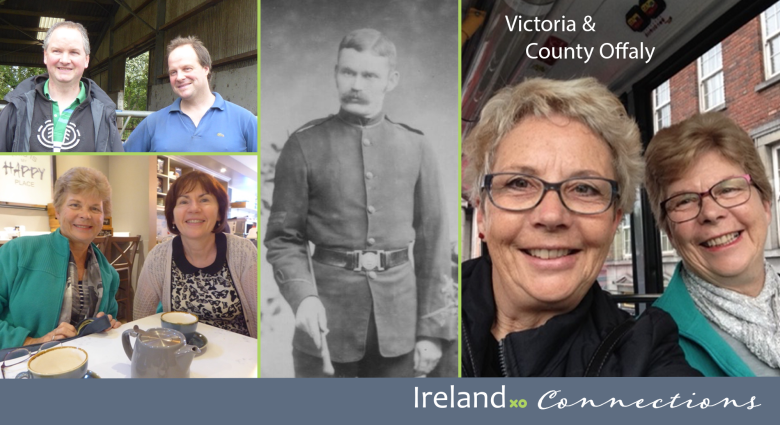 In Ireland, they visited: Tulla, Co Clare; Cree, Co. Offaly; and Dublin.  They also met with Margaret, a volunteer with IrelandXO in Birr, who helped them investigate their Colbourn ancestors who had lived in the area in the early 1800s.

Picture above: Leonie and IrelandXO Volunteer, Margaret, enjoying a cuppa

John Richard Colbourne, their great-grandfather was born in Tulla, County Clare in 1834. He was the son of Richard Colbourn (born in Cree, Kilcolman, Co. Offaly  in 1808) and Mary Culliny. The family lived in Tulla where they  ran a hotel.  After his mother died when John was 14, he spent a lot of time on his grandparent's farm at Cree, County Offaly, where he became expert in handling horses.

Marie and Leonie were thrilled, with the help of Margaret a local IrelandXO volunteer, to visit the very  farm where their great-grandfather, John Richard Colbourne, had spent so much time in his youth. And even today the farm in Cree remains in the Colbourne name – meaning the sisters were able to connect with their Irish cousins! A wonderful day was spent visiting their Colbourne family and meeting Ray and Hilda Colbourne and their sons, David and Alan, was a real highlight of their trip.  Leonie and Marie were shown around the farm and driven to local cemeteries where their ancestors are buried.  They were delighted to see the land where their ancestors lived and to walk in their footsteps. 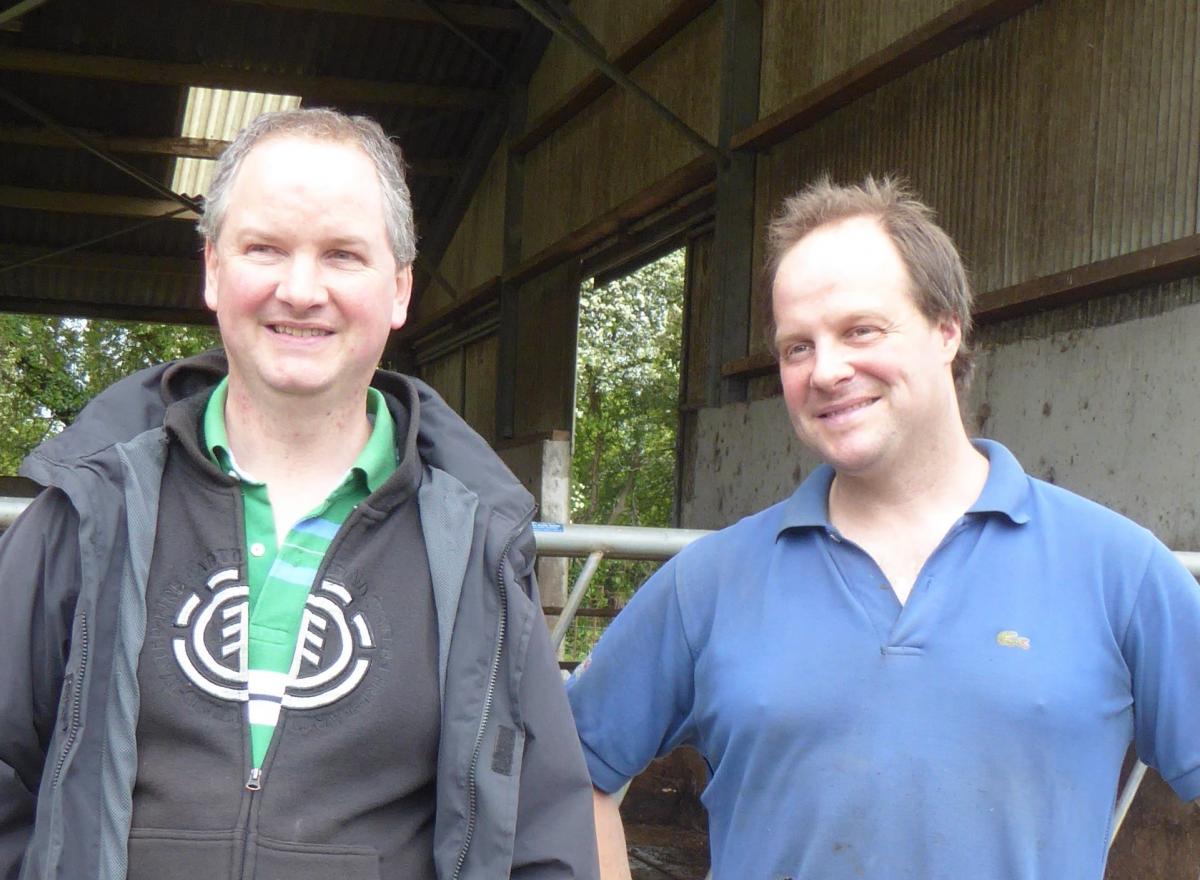 Picture above: David and Alan Colbourne at their farm in Cree, County Offaly

John Colbourn joined the Irish Constabulary in Dublin when he was 20, resigned to join the army and went to the Crimea, then rejoined the Constabulary upon his return from the Crimean War. And as it turns out it was likely in Dublin that he met his future wife.

The background of John’s wife, Maria Harwood, was quite different to that of John. Maria was a servant girl working in Dublin, but was originally from Barford, Warwickshire, England. Finding out just how Maria ended up in Dublin was another of the highlights of the sisters’ trip to Ireland, leading them to learn even more fascinating family history!

In Dublin, the sisters, Leonie and Marie boarded the Hop On Hop Off bus, to find where their ancestor Maria Harwood had worked as a servant at 11 Fitzwilliam Square East. The building is now the Italian Institute of Culture.  To their surprise, further investigation showed that in the mid 1800s, the Molony sisters, spinsters Lucinda and Selina, owned the property. Their mother, Selina, was the daughter of Rev John Mills from Barford in Warwickshire.  Maria Harwood, along with her sister and father, had previously worked for a Mills family in Barford and Bath.  The family of Lucinda and Selina's father, James Molony were wealthy landowners from Kiltanon, just outside Tulla. He married Selina Mills from Barford Warwickshire in 1780. So there was obviously a connection between the Harwood family of Warwickshire and the Molony family of Kiltanon, County Clare, near Tulla through their connection with the Mills family. John Colbourn and Maria Harwood likely then met in Dublin.  Perhaps John's friend, Arthur Vandeleur, who married Mary, the eldest daughter of James Molony, played some part in the meeting.

Just one month after their marriage in Dublin, John and Maria left Ireland for Australia. John joined the Police Force in Victoria and was posted to St Arnaud.  They later moved to Ballarat where he worked as a clerk in a solicitor's office and as a miner. Together they had four children, two boys and two girls, but John’s drinking became problematic leading to his discharge from the Victorian Police Force. His alcoholism caused problems for his young family, to the extent that his son, also John Richard Colbourn, was forced to work in a goldmine as a ponyboy from the age of eight, thus foregoing an education.  One of their daughters, Harriet, was to marry Joseph Wormald of the notable Wormald family from England, famous for fire insurance and fire-fighting devices. 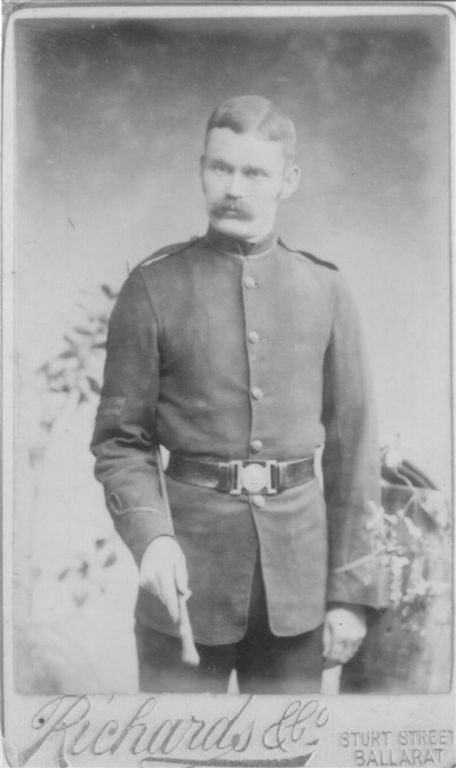 Picture above: John Richard Colbourne, the great-grandfather of Leonie and Marie

John Richard Colbourne died in Ballarat, Victoria, Australia on the 20th of October, 1892, at the age of 58. His wife, Maria outlived him by over 25 years, dying in Ballarat on the 2nd of August, 1918.

What do the sisters, Leonie and Marie, have to say about their family history trip to Ireland and the assistance given to them by IrelandXO?

It was so good to meet personally with Margaret who had worked hard to establish the connection for us with our Colbourne family in Cree.

According to Leonie and Marie, their experience with IrelandXO has been most worthwhile and extremely helpful  in connecting them with members of the Colbourne family and sorting out their family story.

Are you inspired by Leonie and Marie’s story and would like to connect with your place of origin in Ireland? You can – with a little help from IrelandXO! A simple post on our Message Board may be all you need to get started on your journey.