Ann McKenna Fraser lives in Scotland.  Her initial contact with Ireland Reaching Out was following a Google search for alternative websites where she could post details, having used all the more obvious options available to her.  Here she tells her story, how her motivation to discover more about a life cut tragically short, led to her connecting with descendents on the other sider of the world. 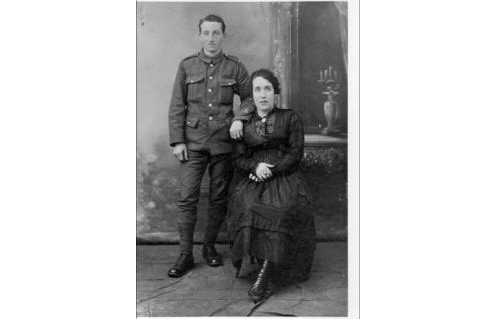 In December 2015 I registered and posted what information I had in my search for my maternal relatives Owen and Catherine Coleman.  Within this post I included details of my Gt. Aunt Mary Coleman who married Michael Joseph Cawley.   I included them as they held a special place for me.   I am sure many of you who research your family knows, there is always someone you are drawn towards.

Michael was born 12 November 1894 in Ballymote to Michael Cawley and Jane McGovern.  Census records 1901 informed he was living with his parents and siblings [Peter, Charles] at Newton Street, Ballymote after which I then found him with his older brother John at Wellfied Street, Glasgow where he was employed as a railway engine greaser.

From that point I could find no trace until his marriage to Mary on 12th October 1917 in Glasgow.  On the marriage certificate he was a private in the Machine Gun Corp and On Service Abroad … the couple of days they had together after the marriage were the last Mary was to see of Michael.   My Gt. Uncle Michael Joseph Cawley was killed in action 2 September 1918, less than a year after they were married.  Records from the Commonwealth War Graves Commission inform he is buried at Lesboeufs, Departement de la Somme, Picardie, France.

Even after his death he was not forgotten by Mary, some years later she wrote to the Commission and paid to have a further inscription placed on his headstone that read   ‘SLEEP ON DEAR MICHAEL AND TAKE THY REST, THEY THAT MISS YOU MOST LOVE YOU BEST'.

A sad ending but in some ways a joyful one as through Irelandxo after all these years of searching I have found a link to Michael named Larry O’Keefe, who is kind enough to offer information and willing to send me a photo of Michael and Mary, for that he has my heartfelt thanks and also to Ireland XO because without their site this great gift may never have occurred.   The contact that found me through the site is the grandson of Michael’s brother John Joseph who immigrated to America 1923 …  so the link of family has forged from Ireland to Scotland to America … hands across the miles, hearts across the years … 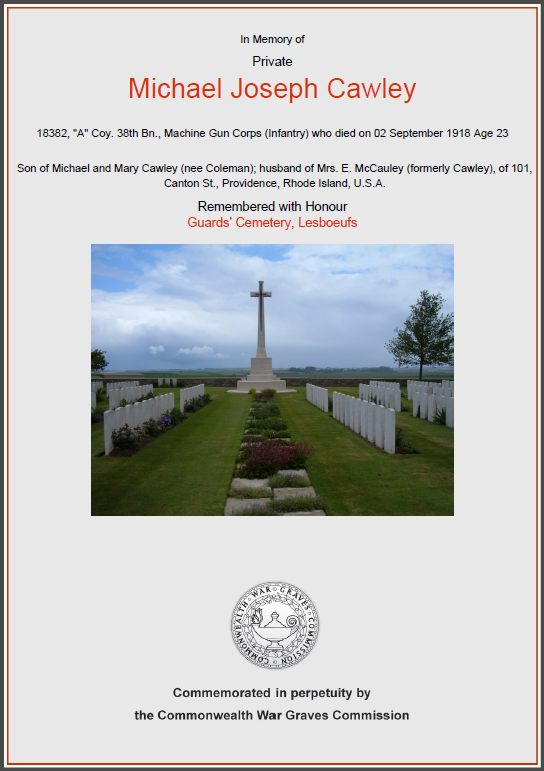 Please note that parental details are incorrect on CWGC and they have been asked to amend: Michael’s parents were Michael Cawley and Jane McGovern .. his wife was Mary Cawley nee Coleman (who later married Edwin McCauley) The wedding photo pictured here was was taken in October 1917 -  Mary is dressed in black as her father died in July 1917 and by September 1918 she had lost both her father and husband.