Barbara Ryan-Proctor's Great Great Grandfather John Joseph Ryan emigrated to the US in 1879-1880. She, and her son Kevin, travelled to Ireland in the hope that they would discover more about their Ryan and Riordan family history. With help from local IrelandXO volunteer, John Kennedy, they reconnected with their Limerick and Tipperary roots, and also found that a talent for music runs in the family. 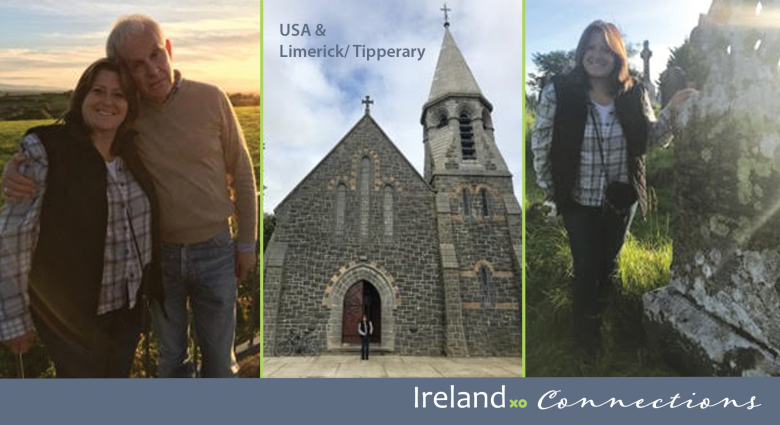 "I had an incredible time with John Kennedy. I felt like I was on the show “Who Do You Think You Are.” Upon our arrival in Limerick he had the whole day planned. We went to two local churches that my family would have attended before they emigrated. We also met some incredible people that knew my family and even some that were distant relatives. We ended the day by finding the tombstones of my family. I could not asked for more, It is a day I will never forget. I would encourage anyone that is researching their Irish lineage to contact Ireland Reaching Out.

John Kennedy, was so thorough, so kind and I enjoyed discovering my heritage with him. He shared a great deal of Irish history with me, which added to my understanding of my family roots. I only have wonderful things to say about him."

"I met Barb and her son Kevin off the train at Limerick Junction on Friday morning, and spent the day taking them to meet people and exploring cemeteries in the Templebredon, Emly, Cullen, Tipperary, Oola and Monard area. It was one of those days that succeeded beyond my wildest dreams, and they were so thrilled with the wonderful people that they met and the places they visited.

She had very little information for me to work with, and I spent hours online and drew a blank. So in desperation I spent two afternoons driving around the area, cold calling to houses, looking for a lead. My breakthrough was in discovering the nickname was Ryan 'Jobber', which enabled me to take her to meet cousins, who were so nice and gave her a great welcome. I also took them to the ancestral Ryan farm, and by chance met the current owner (who is not a Ryan). He was very entertaining, and was a big hit with them, and told them of their antecedents being evicted and how his family came to own the place, interspersed with great storytelling.

Two events really 'gobsmacked' them, one was visiting a music shop in Tipp town owned by a cousin, who has a degree in music, and whose father had a band composed of eleven Ryan family members. Kevin, her son is a professional musician, and he is self taught, and she had no knowledge of anyone with musical talent in his ancestry, until she discovered all these musical cousins. The other find was in Emly cemetery, where a cousin told us there was an old Ryan Jobber grave. We had already spent ages in Oola and Templebredon graveyards finding Ryan graves, but without the Townland on nickname inscribed on them, it was fruitless. But when we cleaned off all the moss from the lettering on this memorial by rubbing with grass, there was the name of her g g grandfather who erected the beautiful Celtic cross stone to the memory of his mother who was born in 1825. Because the graveyards in the area are not online, I could not do a search on historic graves beforehand, so this find capped a wonderful series of ancestral discoveries for them.

I have never had such a day that started off with so little information, and by the end, because of a series of lucky breaks, had accomplished so much."

"I can not thank John enough for all that he did for me and my journey to find my Ryan’s It will definitely be a memory that I will cherish for a lifetime. After leaving Emly, we wrote down as much as we could remember that happened though out the day. Recalling all the places we went and all the people we met - I get goose
bumps just thinking about it. The Irish are so kind and welcoming. It made feel very proud to be an Irish Ryan …. and now a Jobber Ryan!"

"I have a lovely memory of us driving into the main street of Emly late in the afternoon, and I spotted three eight or nine year old lads walking home from practice in the Hurling field. I stopped the car and we all got out, and I asked them to show their 'camans' and 'sliotars' to these American visitors. They were wonderful, they
demonstrated how to hold the hurley and how to rise and strike the ball, and answered Kevin's questions about scoring in the game (he was a baseball player).

Seeing the happiness on the faces of people who have 'found their roots' through my efforts, is very rewarding."

Are you feeling inspired by Barbara and Kevin's story? A simple post on the IrelandXO Message Board may be all you need to get started on your journey. Or perhaps you have already made the trip "home" to Ireland to visit the place of origin of your ancestors? If so, we'd love to feature you in an upcoming IrelandXO Connection Story. Contact us at info@IrelandXO.com to share your story.