So where are the Dwane family buried?

When a letter from Mary Leonard in New Mexico arrived in Roscrea, the search for a family headstone began. 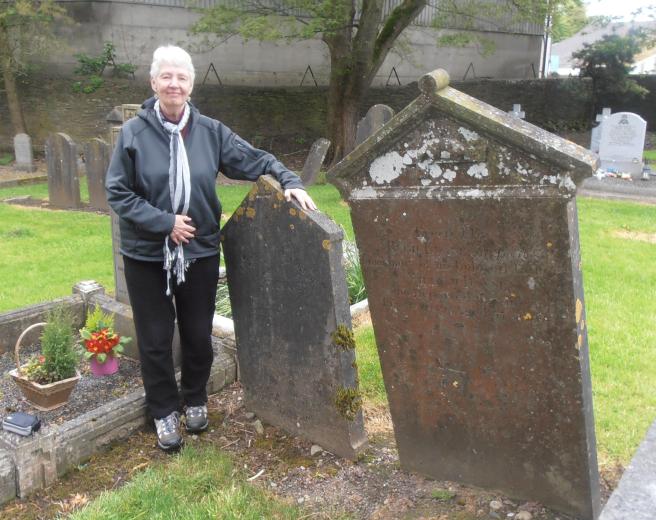 Mary who was a retired nurse hoped to come to Ireland and learn more about her long lost Irish family, specifically her Great Grandmother whose family named Dwane (misspelled on entry to the U.S. as Duane) had lived and worked in the Roscrea region. Like millions of others the family had emigrated to the U.S. in 1846 fleeing, as they were, at the beginning of the Great Hunger (An Gorta Mor). Mary had gathered a lot of information from earlier family stories and writings and was able to lay a good foundation for a potential search. Her brother had also recorded his findings on an earlier trip to Roscrea in 1950, stating that he had found two headstones of the family in the Catholic cemetery of Roscrea with the correct family names and dates.

So it seemed that on the face of it there was a very simple task ahead - locate those two headstones in the local cemetery and provide Mary with the information she needed. There is nothing simple however about searching for families in the Roscrea group of parishes! Roscrea is divided into two provinces, Munster and Leinster, three Counties, Tipperary, Offaly (King’s) and Laois (Queen’s) and numerous rural parishes surrounding the town for many many miles all with their own graveyards. In all there are many, many graveyards!

The notations on the two headstones were recorded in 1950 as follows:

Erected in memory of Hugh Dwane, born 1826, died 1869 by Mr & Mrs Henry Trench and their son Henry Bloomfield Trench in gratefully remembrances of faithful services from boyhood until death.

Roscrea town boasts a 1000 years of history and its cemetery reflects that longevity. Eamonn, our Ireland XO Roscrea Volunteer, was satisfied that the local undertaker (who had a database of local graves), was the first point of contact. He assured Eamonn that he was not familiar with the name 'Dwane' and to his knowledge there were no Dwanes buried in his domaine. As Eamonn is Roscrea born he remembered the name 'Trench' (from a headstone) from a bye gone era of landlords who occupied three large houses at Sopwell (Ballingarry, N.Tipp), Cangort (Shinrone) and Redwood (Lorrha) with large tracts of lands attached.

Further research about the headstone with reference to ‘Bloomfield’ confirmed that the mostly likely 'Big House', where a Hugh Dwane worked through his lifetime, was "Cangort”, in the historic village of Shinrone, Offaly. Eamonn's first graveyard search took him and his brother to the old Church of Ireland in which Barack Obama's ancestors are to be found. His search there was not successful. The next step was to call on the local historian Noel McMahon who lives in the village and has two books published on Shinrone. He pointed out that there were pictures of a Dwane Priest and Sister in his books who were most likely related to the search and he suggested that the ancestors were most likely buried in the ancient Kilcomin Church grounds two miles from the village a place set apart, home to St. Cuimin who founded his Abbey there in 630 AD. Unfortunately this search was also unsuccessful.

Eamonn met Mary at her Roscrea B&B with the owner Mary Warren, who was also keenly interested in a successful outcome to Mary's search. He could not have this guest coming all the way from New Mexico going back home without finding her ancestors! Mary on arrival immediately set to search the archives of St.Cronan’s Church, Roscrea and the surrounding graveyard herself but again to no avail.

The following day on their way back from another fruitless search Eamonn passed a bungalow and noticed two people working on their very beautiful front garden. He stopped and sought advice as to the whereabouts of the elusive Dwane family. Yes, he (John Ryan) was familiar with that surname and seeing as the day was nice and sunny they both dropped the gardening tools, put on the wellies and joined in the search. What a delightful surprise, it could only happen in beautiful Ireland.

John led them to the house of Michael Delahunt (Sopwell) - the foremost authority on names of families, burial places and graveyard recordings in North Tipp. Without his wonderful help given friendly & freely Eamonn believes the search would have been a failure. Michael has spent his life’s work researching and recording the graveyards of North Tipp and actually knew the more recent family of Dwans. He had a detailed knowledge of where the ancestors were buried and then went on to sketch out on the ground with his walking stick the last known house of the Dwane family in the district just a mile or so from his front gate (now bulldozed). Better still, Michael was able to come up with the exact location of the two elusive headstones of the older Dwane burials. He said with conviction that Eamonn and Mary would find those stones inside the front entrance to Roscrea’s cemetery 100 yards to the right from the Franciscan Archway. There, within feet of where Michael Delahunt said they would be, were the headstones - much to Mary Leonard’s delight.

But the story didn’t finish there. A few days after Mary's departure a fellow XO Volunteer, Ann DeRoe who lives in Shinrone called Eamonn to say that she had discovered the modern burial place of the family in Shinrone R.C. graveyard and has a connection to living relatives who possibly live in Portumna. Mary Leonard’s brother & family are now planning on visiting Ireland and hope to make the connection with living relations after 150 years of separation.