IrelandXO Insight: A Journey to a New Life - Ellis Island

In the mid 1800s market towns and small country villages formed the basis of life in Ireland. The majority of people learned quickly and painfully that the land would not support them and their families, or at least not all of their family. Many made the difficult decision and left in a wave of mass emigration in the wake of the Great Famine (1845-1850), or died from disease and hunger as a result of extreme poverty.

An Gorta Mór changed the landscape of the Irish community forever. This emigration was to continue and indeed is still a part of Irish life today. 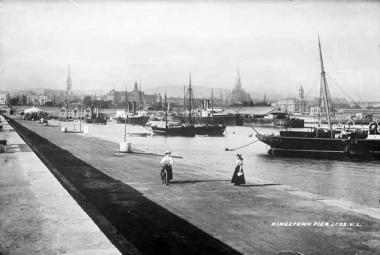 Rural homes were usually made up of only 2 or 3 rooms, many with a roof of thatch and 2 or 3 front windows.  Out-buildings also made up a family’s holding and were often adapted to suit their needs. Many families kept pigs and cows in these out-houses. These farm buildings could also be used to store potatoes, hay or turf.

At that time, people married young and went on to have many children, making it increasingly difficult to sustain the family as it grew. The legacy of Penal Law meant that farm holdings were still very small in size and emigration was often a last resort in order to survive.

The poor year of 1879 resulted in a mini-famine which, together with the beginning of the Land League and tenant evictions in the parish and surrounding areas, continued the tide of emigration from the locality. Around this time there were two local shipping ticket agents in Tulla for example and others around Ireland, advertising passage on the a American Line to New York and Philadelphia. The impact of this movement of people from the local community can be seen in the 1901 Census, which states that emigration was the main cause of the 35% drop in population.

Journey to a new life

For many emigrants, payment of the passage to America was one of the most significant events of their lives. Some who could afford it paid their own, but the majority of emigrants received the passage from a family member, usually a sibling who had already made the journey across the Atlantic, paving the way for younger brothers, sisters or even parents to follow.

The cost of passage in Steerage or Third Class remained steady at around £5 between 1880 and the start of World War I. At the time, this was the equivalent of about half the yearly earnings of a labourer.

Queenstown (Cobh) was the most practical port of departure for those leaving Ireland though Londonderry did offer passage for thos in the north of the country. They would wait to hear news of the ship having been cleared for departure from Liverpool, and then would make their way by train to County Cork. The majority of emigrants left as teenagers or in their twenties and many would never have needed to travel very far at all. The prospect of a move to America must have been monumental.

Queens of the Sea

By the time the Ellis Island Immigration Station officially opened in 1892, transatlantic travel had come a long way when compared to the "coffin ships" of the famine exodus.  At the turn of the century, the crossing was made on steam powered ocean liners, with journeys from Ireland lasting between 6 and 12 days.

Steerage was increasingly referred to as "third class" and in 1907, The White Star Line published its new brochure announcing "in former days, the accommodation consisted entirely of what might be termed open dormitories, whereas now it includes good separate airy cabins; and the Third Class passenger is better off in most respects than the Intermediate of twenty years ago, while the fare is not more than was paid by his predecessor in the Steerage."

Passenger travel between Europe and North America had become a competitive business with ocean liner companies such as Cunard Company, White Star and American Steamship Company just some of those competing for the Irish share of the market. Modern marketing techniques were employed with glossy brochures and press advertising used to promote and differentiate their on-board facilities and services.

After docking at the Hudson or East River piers, third class or steerage passengers were shuttled to Ellis Island on ferryboats for inspection and immigrant processing. Due to large numbers of immigrants arriving into New York, people often had to wait days on these ferryboats, in freezing and unsanitary conditions, before being able to disembark at Ellis Island.

After landing, emigrants collected their baggage, often a single suitcase, using a special tag they had been given and underwent a series of checks before being allowed to continue on their journey into the US. There was a physical examination by medical officers and immigrants went through a legal inspection that focused on information given in the ship's manifest. This included details of their nationality, trade and literacy skills.  If a person was healthy and their papers were in order, the immigration inspection usually lasted between 3 and 5 hours.

Failure of either of health or legal inspections could result in deportation. Staten Island had a quarantine station which housed immigrants awaiting deportation as a result of infection or ill health. One of the most serious medical conditions was the eye condition, trachoma and those suffering with this were marked with the initial 'CT' on their clothing. Overall the examination process was stressful, especially for women as male only doctors were employed up to 1914. Other medical conditions that inspectors would perhaps exclude an immigrant included pregnancy (marked by a 'PG'), hernia (marked by a 'H') and lameness (marked by an 'L') along with other serious illnesses like mumps and diphtheria, although a hospital wing could accommodate those who became ill on the passage. There were also a series of intelligence tests for those deemed to be mentally unstable. Single, unmarried women too were at a great disadvantage and along with illegitimate children were usually deported on moral grounds.

A passport was not needed to enter the US at that time. This requirement didn’t come into place until 1925.

There was a money exchange office on Ellis Island so that newly released immigrants could exchange their home currencies for the dollar – one of their last tangible connections to their previous existence.

This 3 minute video, from the LIbrary of Congress Archives, depicts scenes at the Immigration Depot and a nearby dock on Ellis Island. First we see a group of immigrants lined up to board a vessel leaving the island, then another group arriving and directed off the dock and into the Depot by a uniformed official.

The original Ellis Island Immigration Station was officially opened in 1892 and the first immigrant to pass through its doors was a 13 year old girl from County Cork by the name of Annie Moore.  She had travelled from Queenstown on the Etruria with her 2 younger brothers and they were on their way to join their parents who had had already settled in New York City.

A carnival of sights, smells and sounds

Ellis Island was incredibly busy, a city in itself and many thousands of people passed through each day.  People from all over the world were flocking to the new opportunities offered in the US and the immigration station would have been a melting pot of Asians, Africans, Europeans and Russians.  There was a vibrant mix of languages, faces and costumes – all of which were completely new to Irish people who had left home for the first time, and now found themselves in this chaotic but exciting place.

Although many Irish immigrants settled in New York, Ellis Island was very much a gateway to North America and most people travelled onwards to settle across the US and Canada.  The main US hubs for Irish immigrants at the turn of the 19th century were Illinois, Kentucky, Ohio, Massachusetts, Michigan, New Jersey, Connecticut, Pennsylvania, Philadelphia, Nebraska, Los Angeles and New York.

It is estimated that almost half of all Americans across the USA today can trace at least one of their ancestors to Ellis Island.