Old Irish maps are an essential resource for Irish family historians and genealogists.

Want to locate your ancestral home, parish church, or nearest market town? Or explore the roads that rose to meet your ancestors' footsteps back in the day?

Here's our guide to the best maps for Irish family history research ... 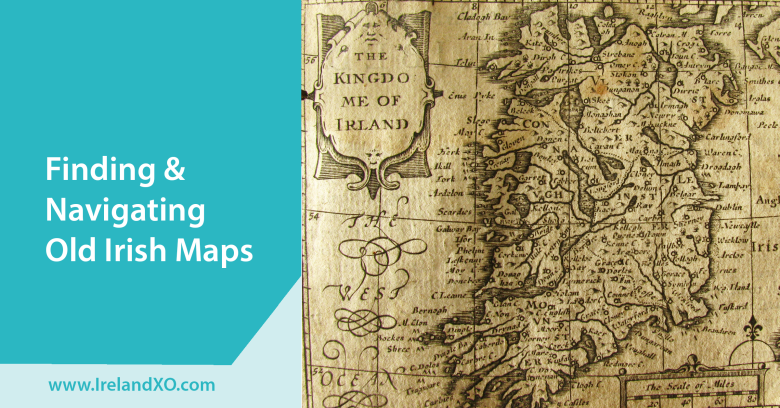 Did you know that the first-ever detailed land survey on a national scale, anywhere in the world, was taken in mid-17th-century Ireland? In the early 19th century, Ireland also became the first country in the world to undergo a detailed ordnance survey. And the good news is these maps have been digitized and can now be accessed online... for free!

Old Irish maps are not just for archaeologists, geographers, and historians. When it comes to locating the places where our ancestors lived in Ireland, these historical maps can point us to homesteads long gone, surname clusters, and more.

Historical maps can help identify old placenames, boundary changes, neighboring relatives, the effects of the Great Famine, and other insights into our ancestors' lives.

Specialised maps (e.g. civil parish, church & diocese, or workhouse PLU) can help us make sense of the clues our ancestors left behind.

This guide will help you discover the best maps for Irish family history research, and how to navigate them.

Don't forget, you can also jump on our Local Volunteer Message Board for help making sense of Irish maps, old and new.

Explore your ancestral county just after Cromwell. Discover surnames connected to the land before the rebellion, alternative placename spellings, and how it was settled before and after (English vs Irish speakers).

Hiberniae Delineatio, the first atlas of Ireland, was created in the 17th century following the Cromwellian conquest of Ireland (1649–53).

See your ancestral town or village (and the routes between them) in Penal times. Discover houses, churches, inns, and other landmarks in their heyday.

Discover your ancestral county in exquisite detail when the roads were few and winding. Revisit the landscape your ancestors knew before the Great Irish Famine (1845-52) changed it forever. 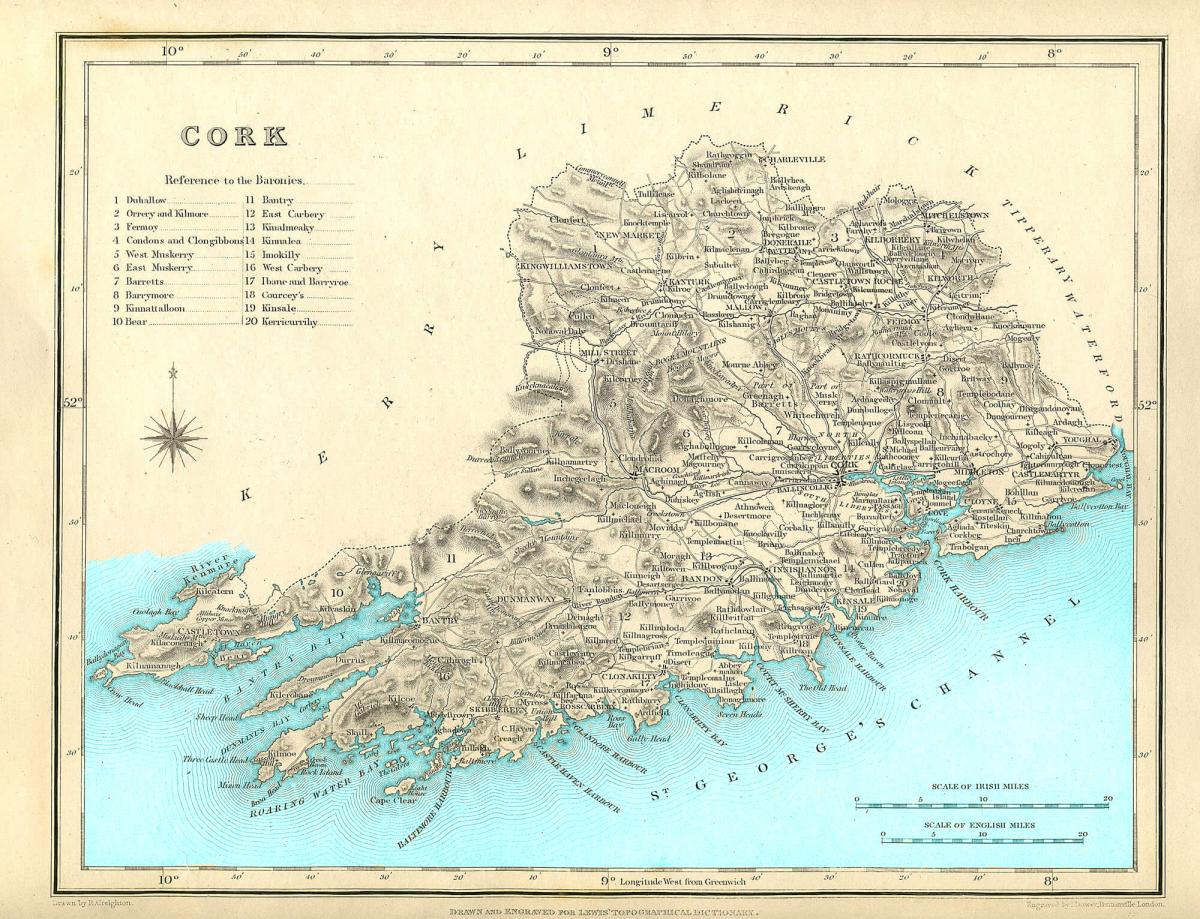 Lewis' Topographical Dictionary of Ireland is one of the most valuable and unique sources of local history in Ireland.  The equivalent of a tourist's "Lonely Planet Guide" in its day, it came with an accompanying atlas of exquisite county maps. If you fancy adorning your wall with your ancestral county map, the L Brown Collection offers high-resolution sepia Lewis Map prints.

> VIEW  Your County before the Famine

These 6-inch OS maps are an unrivaled source for the period immediately before the Great Irish Famine. Their significance for Irish family history research cannot be overstated.

This early 19th century Ordnance Survey of Ireland (OSi) was the first complete survey of Ireland since Petty's Down Survey. Acclaimed by cartographers for its accuracy, it was also the first-ever large-scale ordnance survey of an entire country anywhere in the world.

Working from north to south, the survey began in Antrim and Derry in 1829 and was completed in Kerry in 1842.  From 1838, even field boundaries were included in the surveys. 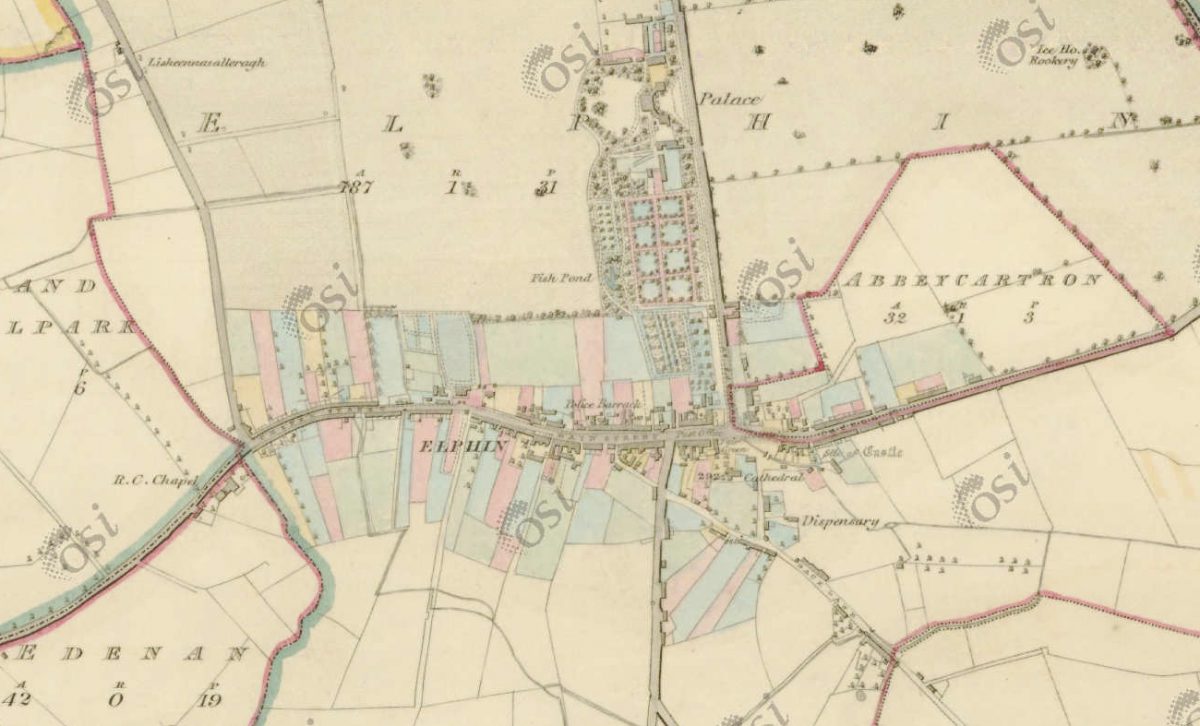 The maps details include:

Charles Close Society  A short History of the Ordnance Survey in Ireland.

The spelling of Irish placenames (such as townlands, parishes, and towns) was standardized by these maps. During this process, John O'Donovan recorded a lot of each placename's history. (For example, Lehinch aka Lahinch was sometimes recorded as Lahensy/Lahinchy and more). DISCOVER alternative names and spellings on logainm.ie under "Archival Records".

Match a property on a map to a name recorded in Griffith's Primary Valuation and vice versa. 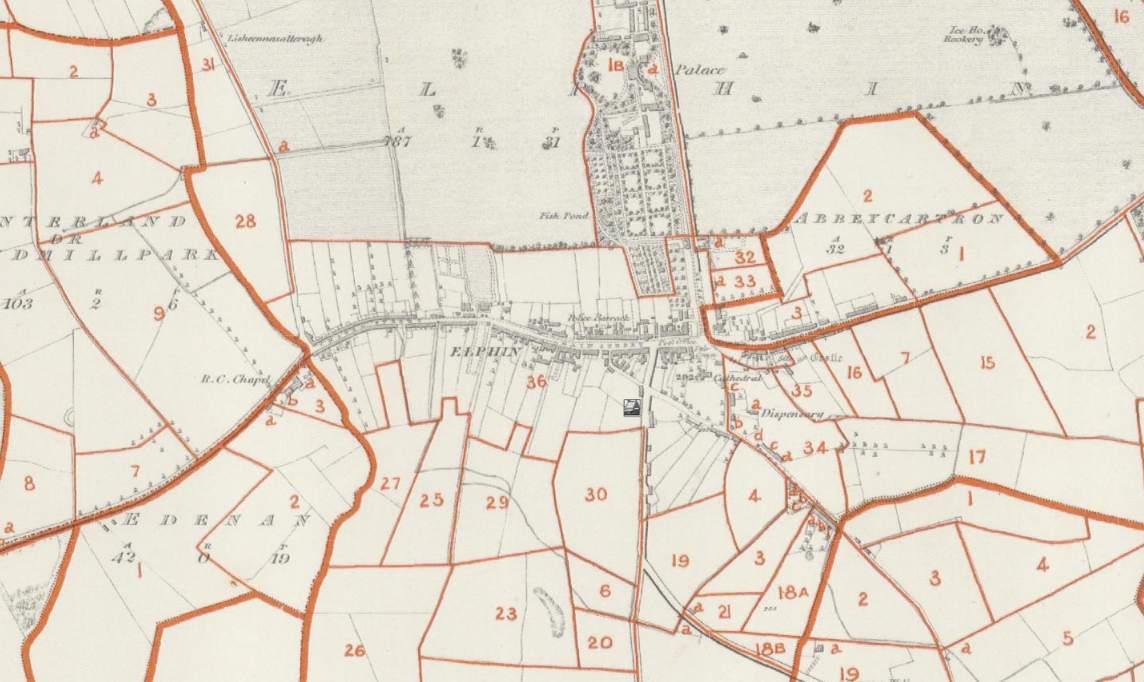 The 6-inch OS maps were used as a basis for the Primary Valuation of Ireland aka Griffith’s Valuation – Ireland's first full-scale valuation of property for taxation purposes. Griffith’s Valuation Ratepayer lists (circa 1844-1865) were matched to each property (by number and letter) on these maps and can be searched online at AskAboutIreland. Searches can be made by surname or placename. Unpublished town plans are also available when viewing the maps (click on "show towns").

Map revisions: When the first edition of OS maps was completed in 1846 the counties of Antrim, Armagh, Derry, Donegal, Down, Fermanagh, Monaghan, and Tyrone were resurveyed to add field boundaries. And this general revision was extended to other counties due to changes in the post-famine landscape. 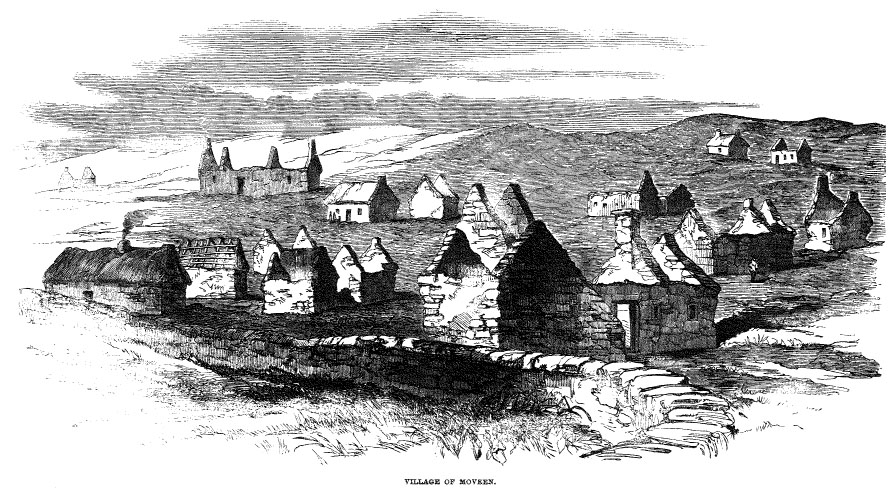 Villages wiped out by the famine (such as Moveen, Co. Clare depicted below) are revealed by the dearth of letters attached to homes mapped (a decade earlier in the first OS survey).  Only the homes still inhabited at the time of Griffith's post-famine valuation made the ratepayer's list. Those unmarked can be presumed to be "down" or used as outbuildings. 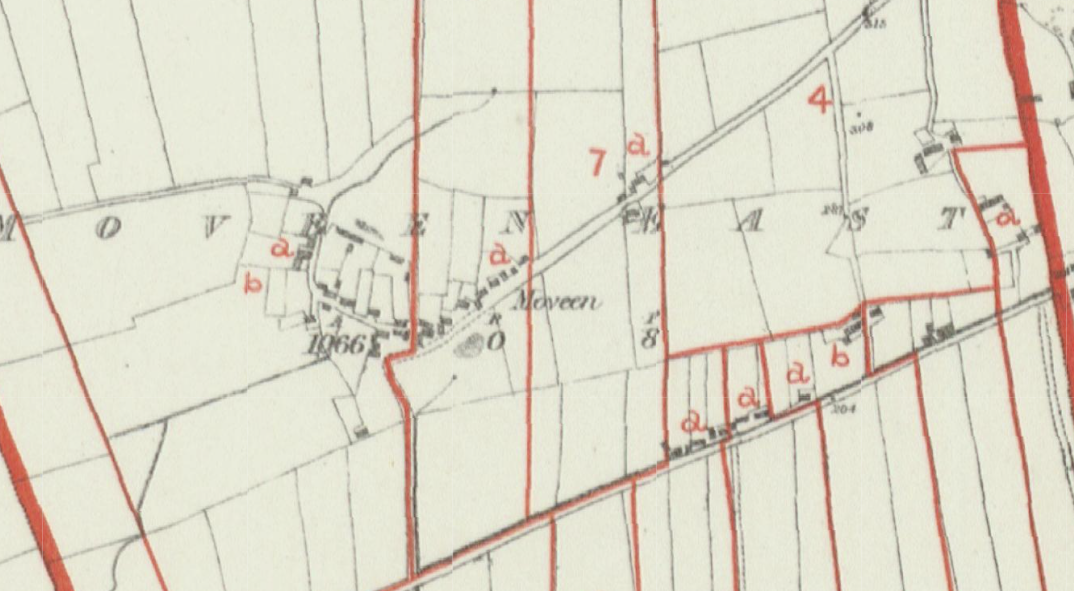 These 25-inch OS maps can be used to locate properties attached to names recorded in the Irish Census of 1901 & 1911.

Revision of the 6-inch maps ended in 1887 when the government agreed to survey the country at the larger scale of 1:2,500.   Key search fields in the census are also recorded and searchable on the Geohive mapping website.  Street names and locations such as Townland names are common to both datasets and can be cross-referenced. Click on "Historic Map 25-inch" to view and compare. 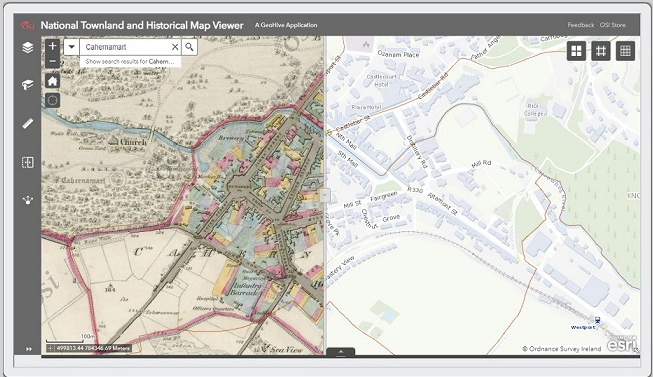 Much like Ireland's infamous road signage, navigating Irish maps can be a challenge for Irish genealogy research. Before delving into Irish maps, it helps to understand the terms used for land divisions in Ireland: